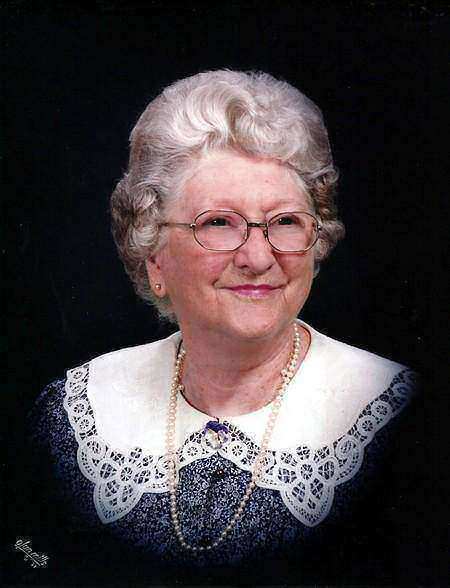 Alma Lucille Wright Bradford, 98, died Saturday, November 10, 2012, at Pisgah Villa in Candler. In crossword puzzles, the connections between clues are not obvious, sometimes even contradictory. The threads binding the words together often don't become clear until every letter is in place. Alma Lucille Wright Bradford loved working to solve a crossword puzzle, gradually bringing order and meaning to the rows of blank squares. It is impossible to know for certain, but for those who loved Aunt Lucille, we cannot help but wonder if she ever saw something of herself in those puzzles. Like the carefully numbered clues and straight lines required for a crossword to function, she prized order and discipline her entire life. Working a crossword puzzle to completion required dedication and devotion, and Aunt Lucille had both. She was disciplined, but she never allowed herself to be stifled. She lived an extraordinary life that in many ways she defined for herself. Aunt Lucille was born January the 14th, 1914, the fifth in a family of eight born to John Wilbur Wright and Sallie Kate Justice Wright on Hooker's Gap Road in Candler. She graduated from Candler High School, and attended Blanton's Business College, after which she worked as a secretary in Asheville. At the outset of World War II she felt it was her patriotic duty to contribute to the war effort. She took the extraordinary step of joining the army, leaving her beloved mountains far behind to drive a 2-1/2 ton truck in the northwest, as well as serving as a driver for the army officer corps. At the conclusion of the war, Lucille left the army with a distinguished service record. Lucille's desire to serve her country remained and she took a secretarial position at Redstone Arsenal in Huntsville, Alabama. While at Redstone, Lucille contributed to the birth of one of the most exciting periods in U.S. space exploration history. In 1974, Lucille retired from Redstone and returned home to the mountains, and the family that had never been far from her heart. Always a devoted sister and aunt, Lucille never hesitated to care for a family member in need. She loved her nieces and nephews as if they were her own children. She became a second mother to her niece Elizabeth and grandmother to her daughters. She was dedicated to the Senior Citizen's Harvest House, and to Snow Hill United Methodist Church, where she taught Sunday School for many years. After moving to Pisgah Villa Retirement Community in her 90's, Lucille continued the pattern of devotion she had established throughout her life, faithfully attending church until the Sunday before her death. Lucille lived an extraordinary life. She was present and active in some of the most historic events of the last century, often carving her own path to do so. She was utterly devoted to her extended family and church in every way. No matter how she felt physically, she never failed to find her place in the front pew at Snow Hill UMC. Aunt Lucille leaves behind an remarkable legacy for the people who loved her. Like her puzzles, Aunt Lucille brought together discipline, devotion, and creative independence, that once complete, present a life that is inspiring and encouraging to those whom she cared for, and who loved her deeply in return. Funeral services will be at 1:00 p.m. Monday at Snow Hill United Methodist Church with the Rev. David E. Peeler officiating. Interment will follow in the church cemetery. The family will receive friends at the church one hour prior to the service. Memorials may be made to Snow Hill United Methodist Church, 84 Snow Hill Church Road, Candler, NC 28715. Groce Funeral Home on Patton Avenue is assisting with the arrangements.