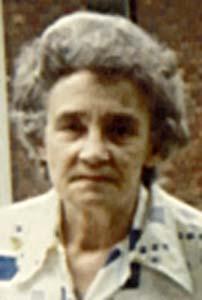 Mrs. Lindsey was born in Caldwell County and was a daughter of the late Burley Azor and Mamie Setzer Suddreth.  She was also preceded in death by two husbands, Lester Lee Robinson in 1945 and Floyd Lindsey in 1988, and by a sister, Onnie O'Kelley.

Mrs. Lindsey was a homemaker who delighted in quilting and in growing lovely flowers.  She was a former member of Davis Chapel United Methodist Church.

Funeral services will be at 4:00 pm Saturday in the Patton Avenue chapel of Groce Funeral Home with the Rev. Dennis Thurman officiating.  Burial will be in the Snow Hill United Methodist Church Cemetery.

Her family will receive friends from 7 - 8:30 pm Friday at the funeral home.