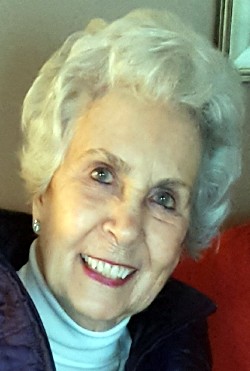 Barbara Macon Brown, 88, of Asheville, passed away Wednesday, October 20, 2021 at her home with her beloved family by her side. Barbara was predeceased by her loving husband of 51 years, Ted W. Brown, who passed away in 2006.

Barbara was born in Georgia on June 24, 1933 to William Culberson Macon and Lorene Gammell Macon. She was the 3rd child of four siblings who grew up very close in a loving and Christian home.

Barbara’s family moved to NC when she was in elementary school and she grew up being a member of Central United Methodist Church where she joined the choir as a teenager. She attended Lee Edwards High School where she gathered many friends whose friendships she cultivated the rest of their lives. Barbara graduated from Lee Edwards in 1951 and that same year won the Miss Asheville title playing the piano for the talent portion.

Barbara went on to Asheville Biltmore Jr. College, graduating in 1953. She was crowned Miss May Day Queen at the college the same year.

Not long after graduation from college, Barbara met the love of her life, Ted W. Brown of Asheville. They were married on April 16, 1955 at Central Methodist Church. A year after their marriage she became a mother to two children, Michael in 1956 and Brenda in 1957. Barbara’s greatest love was her family and she raised her children selflessly and with great love. She was the glue that kept her family strong.

Barbara was a lifelong member of Central Methodist Church and an active member of Central’s choir for 70 years as well as being a member of the Handbell Choir and the Wesley Singers. She sang with the Sounds of Harmony singing group throughout the 1980’s.

Barbara was an avid reader, she worked a crossword puzzle everyday and she loved old movies on TCM. She loved feeding and watching the many birds from her kitchen window. Barbara loved animals and she mostly loved her little dog Rosie. She supported the Asheville Humane Society for many years and was a member of their Leadership Circle.

Barbara had a wide circle of friends that she made and maintained over the years. Her children’s friends became her “children” and friends, and she was a second mother to them all. She sent cards with handwritten notes, she called people and she visited them, she listened and laughed with them and above all she loved them genuinely.

Barbara was a very beautiful, kind, giving, sweet, joyful, humble and most of all, loving soul. Her life and love touched the lives of many, and she will be greatly missed by her family and friends.

She is survived by her children, Michael Brown and wife Linda, and daughter Brenda J. Brown. She is also survived by her sister, Gloria Orr and husband Johnny, and brother, Tom Macon and wife Barbara, and many loving nieces and nephews.

She was also preceded in death by her brother, William C. Macon.

In lieu of flowers, donations may be made to the following organizations in memory of Barbara M. Brown: The Asheville Humane Society and Haywood Street Congregation.

A memorial service to honor Barbara’s life will be held at 11:00 am. on Thursday, November 4, at Central Methodist Church in downtown Asheville. The family will host a reception at the church parlor following the memorial service.