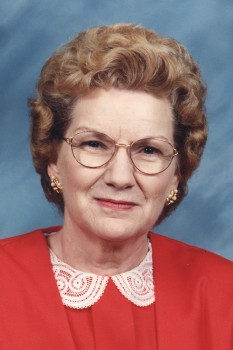 Barbara Parker King, 75, beloved wife of the late Roy E. King, went to be with the Lord on Saturday, February 20, 2010. While she lived most of her life in Buncombe County, she was born in Henderson County on May 2, 1934, to the late Charles N. Parker and Maude Mathis Parker. She was also preceded in death by her brother, Jessie C. Parker. She worked for several years as a cook for the Eliada Home for Children as well as for Ben Lippen School until it closed. She was a member of Starnes Cove Baptist Church. She is survived by her children, Roy R. King and his wife, Gloria, of Asheville, Kathy Robinson and her husband, David, of Fairview, David R. King and his wife, Nancy, of Candler, Richard N. King and his wife, Bonnie, of Asheville, and Joye Wilson and her husband, Tim, of Candler; 12 grandchildren and 14 great-grandchildren. Funeral services will be at 11:00 a.m. Wednesday in the Patton Avenue chapel of Groce Funeral Home with the Rev. Don Austin officiating. Interment will follow at Pisgah View Memorial Park. The family will receive friends from 7 – 8:30 p.m. Tuesday at Groce Funeral Home on Patton Avenue. In lieu of flowers, memorials may be made to the John F. Keever Hospice Solace Center, PO Box 25338, Asheville, NC 28813.