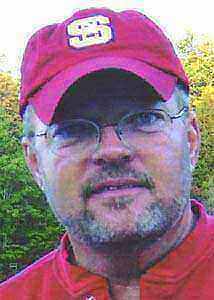 Bruce Edward Briggs, 53, of 1950 Ramble Road, Midland, NC, went to be with the Lord Monday, October 24, 2005. Mr. Briggs was born in Buncombe County and was a son of Martha Marlowe Godley of Charlotte and the late John Logan Briggs. He was a self-employed contractor and a member of Hamilton Crossroad Baptist Church. Bruce was a strong Christian who participated in 87 mission trips to Nicaragua and Guatemala. He shared his love for fishing with friends and relatives in Fishers of Men, a Christian-based association of bass fishermen. In addition to his mother he is survived by his wife Sharon Hamilton Briggs; one son Josh Briggs of Boone; three step-children; one sister, Beverly Newsome and her husband Mike of Weddington, NC; one brother, Roger Briggs and his wife Beth of Guatemala; four nieces and two nephews. Funeral services will be at 11:00 a.m. Friday at Nesbitt’s Chapel United Methodist Church with the Revs. Ron Coffer and Jeff Smith officiating. Burial will be in the church cemetery. His family will receive friends from 7:00 to 8:30 p.m. Thursday at Groce Funeral Home on Patton Avenue, Asheville, and at other times will be at the home of Shirley Marlowe, 1204 Garren Creek Road, Fairview.