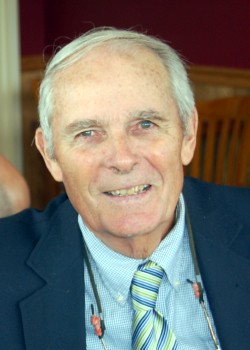 Charles was a native of Putnam, CT, and current resident of Asheville, NC, for more than 15 years. He was a son of the late Edith Elizabeth and Charles Eldredge Stoddard, Sr.

He was a graduate of Putnam High School and a proud alumnus of University of Connecticut, continuing to watch women’s basketball games and frequenting the UCONN Dairy Bar for chocolate milkshakes. He saved middle and high school graduation programs and Christmas and birthday cards from his siblings, grandchildren and friends. Traveling to Germany over 8 times was his passion, which resulted in his being fluent in German. German, Latin, and most recently French were some of the many languages he learned while attending UNCA. Charlie, Eldredge, Grampa or Papa will be remembered as a master bridge player, avid golfer, lover of horticulture – especially beech trees – charitable giver, Central Connecticut librarian, mentor and lifelong learner. He enjoyed eating hotdogs and beans with vinegar and ketchup, stewed tomato casserole with lots of cheddar cheese, mushroom soup, Rum Raisin ice cream and anything sweet. Charles would never pass up an opportunity to visit a Dairy Queen, park, or Spades card game. Charles had a passion for life, was a free spirit, and had a terrible habit of never showing up on time, but he was loved and will be forever missed.

His family will receive friends in Asheville on Wednesday, January 8, from 2:00 to 5:00 p.m. at Groce Funeral Home on Patton Ave.

His family will receive friends in Connecticut on Saturday, January 11, from 2:00 to 4:00 p.m. at Gilman Funeral Home in Putnam.

In lieu of flowers, memorials may be made to the Asheville Bridge Club, Attn: Paul Beebe, Room 800 Fairview Rd. #C1, Asheville, NC 28803.

Charlie would have wanted to say goodbye, Au Revoir, Auf Wiedersehen, until we meet again.