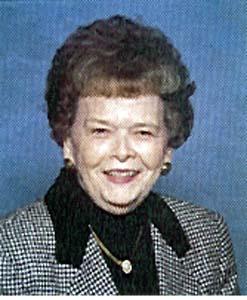 Mrs. Silvey was a native of Towns County, GA, was a daughter of the late Archie and Dessie H. Jenkins, and was married to John W. Silvey, Jr., who died in 1979.

She had lived in Asheville since 1946 and was a retired teacher with the Asheville City Schools.  She received her education at Young Harris College, Young Harris, GA, and her BS degree from Bessie Tift College in Forsyth, GA.  She sis graduate work at Western Carolina University and received a certificate for teaching gifted and talented students.  She taught school two years in Georgia and 39 years in North Carolina.

After retiring in 1983, she spent much of her time wilth volunteer work.  She worked several years as a counselor with ABCCM and she worked in the 'Reach to Recovery' program with the American Cancer Society and with Meals on Wheels.  She was also a volunteer at St. Joseph Hospital.

She was a member of Alpha Delta Kappa, the international honorary sorority for women educators.  She was a charter member of NC Alpha Epsilon Chapter and served as the first president.  After retirement, she joined Fidelis Lambda Chapter, where she also served as president.  At the time of her death, she was treasurer of her chapter.  She was active in the state organization as well, currently serving as Courtesy Chairman.

She was an active member of Esther Chapter #12, Order of Eastern Star, where she served two terms as Worht Matron.  She was serving in the station of Esther at the time of her death.

She was a member of First Baptist Church for 50 years where she worked as Sunday School teacher, junior director, training union, WMU, Mission Action chairman and leader of the Care Group for St. Joseph Hospital.  She had recently joined West Asheville Baptist Church where she was a member of the Chapel Class and WMU.  She was active for several years in Bible Study Fellowship.

She is survived by a daughter and son-in-law, Mary and Rusty Smith of Candler;  a granddaughter, Shelly Wolfe of Asheville;  a sister, Emma Louise Minor of Murphy;  sisters-in-law, Mary Funderrud, May Truelove, and Mita Merrill of Asheville, Betty Tuccori of Grafton, VA, and Betty Jenkins of Atlanta, GA, and several nieces and nephews.

Funeral services will be at 3:00 pm Saturday at West Asheville Baptist Church with the Revs. Ken Lewis and Gail Coulter officiating.  Burial will be at Forest Lawn Memorial Park.