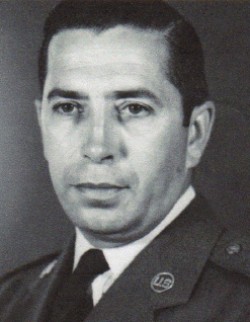 GENE HINNENKAMP ASHEVILLE – SMSGT Eugene Anthony "Gene" Hinnenkamp, USAF Ret., 88, died peacefully Friday, February 11, 2011, surrounded by his family, at home in Asheville, where he had been residing for the past six months, following a prolonged illness. He was born February 4, 1923, in Melrose, MN, to the late Mary and Aloysius "Alex" Hinnenkamp. At the age of 16, he enlisted in the Army Signal Corps and later in the USAF. He was a Communications Center Radio Operator during WW II. His foreign assignments included Germany, France, Libya, and Guam, as well as stateside tours. He retired from Scott AFB on December 31, 1965. He is survived by his son, Klaus R. "Rocky" Hinnenkamp and his wife, Peggy, of Asheville; grandson, Michael R. Hinnenkamp and his wife, Angela, of Horse Shoe; and granddaughter Kristy Hinnenkamp Edwards and her husband, Kenny, along with two great-granddaughters, Megan and Abby Edwards, of Fletcher. He is also survived by his former wife, Ingeborg "Ingrid" Reid, of Asheville. Surviving siblings include his sister, Erma H. Schriver and her husband, James, of Santa Clara, CA, and their eight children and their families. Also, Gene's youngest brother, Arthur "Art" Hinnenkamp and his wife, Donna, who reside in Harlingen, TX, and their five children and their families. Gene is also survived by his long time companion, Augusta, "Auggie" Messina, living in Fairfax, VA with her daughter, Nancy, and her family. Auggie has three other children and their families who also called Gene "Dad" and "Grandpa". Preceding Gene in death were his parents, older brother, Al Hinnenkamp of Seattle, WA, younger brother Don Hinnenkamp, his wife, Loretta, and daughter, Mary Fran, all of Melrose, MN. A full military funeral and memorial service will be held February 26, 2011, in Melrose, MN, to include a full 21-gun salute to show love and honor for this American hero. Groce Funeral Home on Patton Avenue is assisting with the local arrangements.