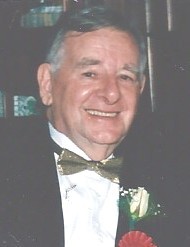 Francis J. (Frank) Dennett, 93, of Asheville, died Sunday, August 10, 2014. Mr. Dennett was born in New Bedford, MA, to the late Thomas and Catherine Dennett. He enlisted in the US Army in 1942, and served in 809th Field Artillery during WW II, including the Battle of the Bulge. He was a career Army Chief Warrant Officer. He had a 40 year career with the military and the US State Department as a Foreign Service officer (diplomat). His assignments took him to Cuba, China, Hong Kong, Malaysia, Nigeria, Libya, Malawi, Italy, Luxembourg, The Hague, and Mexico. He was a member of "the Greatest Generation" and his decades of quiet service helped preserve the freedoms we enjoy. He will be laid to rest at Arlington National Cemetery. In 1943, Frank married Mary Curry of Roaring River, NC. They had a wonderful 61 years of marriage and raised five children. Mary and their eldest daughter, Cathy, preceded him in death. Frank is survived by his wife, Dorothy St. Clare Dennett; his four children, Eileen Dennett of Roatan, Honduras, Michael Dennett of Albuquerque, NM, Theresa Dennett Martini of Rye, CO, and Edward T. Dennett. Grandchildren, Damien Dennett and his son, Camden, reside in N. Fort Myers, FL; Francine Dumas Hill (Larry Hill) and sons Preston and Sullivan reside in Candler; and Michael Dumas and wife, Amy and their four children reside in SC. Frank loved to travel and after returning to the US and retiring, he and Mary bought motor homes and logged over 300, 000 miles of adventure in the US, Canada and Mexico. After his marriage to Dorothy in 2007, they continued overseas travel to Germany, Austria, Italy, France, Portugal, Spain and Morocco. They also enjoyed their visits to Frank's relatives in New Bedford, MA., and visits to CO and NM to see his children. The family expresses their most heartfelt appreciation to CarePartners Hospice for the extraordinary care and support they gave to Frank and Dorothy. Donations may be made to CarePartners Hospice, PO Box 25338, Asheville, NC 28813. Many thanks also to the Basilica of St. Lawrence for their spiritual support. Thanks also go to the NC Home for Veterans where Frank made his transition. A celebration of life to toast a life well lived will be held later at their home in Laurelwood. Groce Funeral Home on Patton Avenue is assisting with the arrangements and the on-line register is available at ww.grocefuneralhome.com