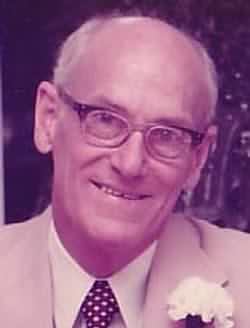 Herman Palmer Medler, 92, of Cane Creek Road, Fairview, died Wednesday, March 24, 2004, at a local hospital. A native of Chevy Chase, MD, he was a son of the late Oliver George and Mary Dougherty Medler. He was also preceded in death by his loving wife Margaret Hoover Medler who died in 1983. He was a retired salesman for Ritter Medical Supply Company and played professional baseball for the Red Sox farm team in the late 1930s. An avid ballroom dancer, he had a wonderful sense of humor, enjoyed being involved in politics and loved taking care of his yard. Survivors include two daughters, Mary Kate Harrison of Sneads Ferry and Eugenia Sue Cheek of Seattle, WA; a son, Gene Medler of Chapel Hill; a step-daughter, Judy Jane Jarvis Wilson of Greensboro; seven grandchildren and two great-grandchildren. A memorial service will be held at 3:00 pm Friday in the Patton Avenue chapel of Groce Funeral Home with the Reverend Perry Brindley officiating. His family will receive friends ollowing the service and request that memorials be made to the American Heart Association, PO Box 5216, Glenn Allen, VA 23058.