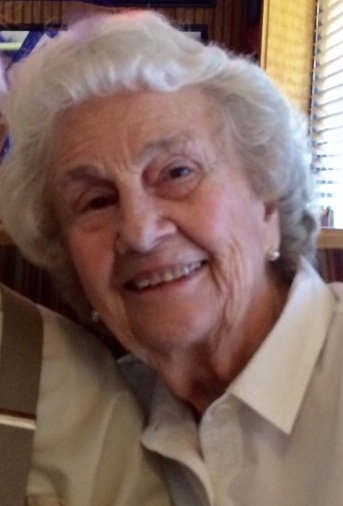 Judith Laura Hahn died peacefully with family by her side at home in Asheville, North Carolina, on September 1, 2017. Judie, as she was known, was born in Decatur, Illinois on February 4, 1925, the fourth child of Robert and Laura Heyne, and moved with her family at the end of that same year to Detroit Lakes, Minnesota, where her father served as a Lutheran minister. Judie was a beloved wife, sister, mother, aunt, friend and “Nana.” She is survived by her husband of 71 years, Arvin William Hahn; her sister Elizabeth Ritter of Bloomington, Minnesota; and, her three children: son Timothy Hahn of Portland, Oregon, son David Hahn of Saratoga Springs, New York and daughter Linda (Hahn) Kendall Fields of Asheville, North Carolina. During her life, Judie was blessed with eight grandchildren, five great-grandchildren, as well as many nieces, nephews and friends from all over the world. A dynamic, engaging and determined whirlwind, Judie began her adult life as an elementary school teacher. Following high school in Mankato, Minnesota, Judie Heyne enrolled at Concordia Teachers College in River Forest, Illinois, where she met her husband, Arvin Hahn and was assigned to teaching positions in Omaha, Nebraska (where she was charged with teaching 50 kindergarteners) and St. John Lutheran School in Forest Park, Illinois. In 1951, Judie and Arv moved to Maywood, Illinois (a suburb of Chicago), where she focused on raising their three children for 16 years before moving to Lindsborg, Kansas and assuming the responsibilities of the President’s wife at Bethany College from 1967 to 1983. Her community involvement notably included becoming Director of the Lindsborg Swedish Folk Dancers (which celebrated its 50th anniversary in 2013) and taking the group on tours of Sweden. Following their retirement from college life in 1983, Judie and Arvin moved to a small farm on the outskirts of Lindsborg, where they lived the quiet, rural life of wheat farmers for six years while taking time out to tour many parts of the world. Always game for a new adventure, the couple decided to move closer to family in Zionsville, Indiana (1989); Augusta, Georgia (1997); and finally Crowfields Condominiums in Asheville (2005) where they moved to be closer to daughter Linda and family. Judie Hahn’s memorial service is to be held on Saturday, September 16 at 2:00 pm at the Lutheran Church of the Nativity, 2425 Hendersonville Road, Arden, North Carolina 28704. Light refreshments will follow the service and interment of ashes. Memorial donations may be made to Lutheran Church of the Nativity (address above); Bethany College, 335 East Swensson Street, Lindsborg, Kansas 67456; or, the Lindsborg Swedish Folk Dancers, http://www.lindsborgswedishfolkdancers.org/. Call 828-712-4003 for further information.