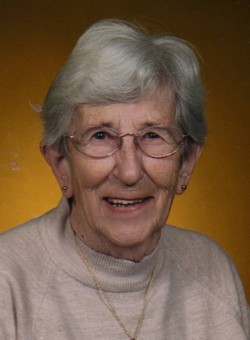 Julia Elizabeth Morgan, 85, of Hartshorn Dr., Candler, joined her Lord and Savior Monday, April 28, 2008, at the Baptist Retirement Home. Ms. Morgan was born on October 18, 1922, in Asheville to the late Ada Anders Morgan and Clyde Terrell Morgan. She was also preceded in death by her three brothers: Terrell Yates Morgan, Herbert P. Morgan, and Edward L. Morgan. A long-time member of West Asheville Baptist Church and later Hominy Valley Baptist Church, she was active in church affairs and was well-known for her wisdom and deep understanding of Biblical practices. She lived her life according to her beliefs and was unerringly fair and kind. She will be missed by all who had the privilege of being associated with her. Ms. Morgan graduated from the University of North Carolina at Chapel Hill in 1944, majoring in chemistry. She worked as a Research Chemist at the Ecusta Paper Corporation, in Pisgah Forest; as a Toxicological Chemist at the Bowman Gray School of Medicine and Carbarrus Memorial Hospital; and then joined the American Enka Corporation, in 1953. At American Enka, she served as Manager of the Rayon Research Analytical Laboratory; Manager of the Polymer Control Lab and Analytical Development Lab; Research Analytical Section head; and as Manager of the Analytical and Testing Research Department. She was active in various civic and political activities, including as a member of the League of Women Voters, as a Girl Scout Troop Leader, as a member of the Pilot International; and as a teacher of adult Sunday School classes for many years. She was a lifetime member of the UNC-Chapel Hill Alumni Association, and was a generous supporter of many charities involving public education, the disadvantaged and animal welfare. She is survived by her nieces and nephews: Gwyn Bowles, of Waynesville, Libba Wagner, of Lexington, Frank Morgan, of Canton, Marsha Henson of Salem, SC, Steve Morgan and John Morgan, of Candler, and Carol Tyndall, of Asheville; special cousin, David L. Williams, of Jacksonville, FL; as well as numerous extended family members. A graveside service will be at 2:00 p.m. Wednesday at Green Hills Cemetery with the Revs. Dr. Joe Yelton and Dr. Fred Werhan officiating. Her family will receive friends from 6:30 to 8:00 p.m. Tuesday at Groce Funeral Home on Patton Ave. Memorials may be made one's favorite charity.