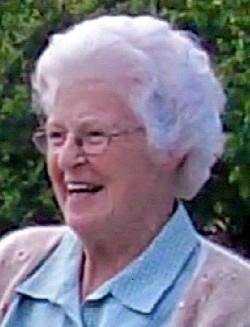 LENA CLARK BECK ASHEVILLE – Lena Clark Beck, 93, of Asheville, passed away at her home on March 6th, 2011. Born in Bryson City Nov. 27, 1917, she was the daughter of the late William L. and Dolly Clark. In addition to her parents she was preceded in death by her husband, Samuel E. Beck who died in 1966, six brothers: Ellis, Gordon, David, Henry, Grady, Cordell and a sister, Sally. She is survived by her sister Gladys Huskey; daughter Gail M. Whitaker; son Lenoir B. Moore Jr. and wife Cynthia; six granddaughters and their spouses, Tina and David Silvers, Nancy and Dennis Gosnell, Jan and Larry Owens, Terry and Douglas Ellington, Tanya and Joel Schaub, Christiana and Dan Wilson; 8 great-grandchildren; 4 great-great grandchildren; and several nieces and nephews. She was a member of the Biltmore Methodist Church. She was previously employed at Ivey's, Belks, and co-owner of the Eleanor Elizabeth Shop. A funeral service will be at 11:00 a.m. Wednesday in the Patton Avenue chapel of Groce Funeral Home, with the Rev. Ron Brown officiating. Interment will follow at Green Hills Cemetery. Her family will receive friends one hour prior to the service.