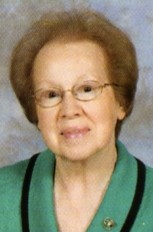 Leona Fender Sams Rains, 81, of 20 Parkview Dr., Candler, NC, died on Thursday, February 19, 2009, at the John F. Keever Hospice Solace Center. Mrs. Rains was a daughter of the late William Marion and Mary Jane Fender. She was also preceded in death by her husbands, Jack Ronald Sams, who died in 1977, and John C. Rains, who died in 2002. Mrs. Rains had worked as a seamstress for Ivey's Department Store. She was a member of Freedom Baptist Church. She is survived by her sons, James David Sams, of Asheville, NC, Jack Sams and wife Donna of Gastonia, NC, and their son Seth Ronald Sams, of Asheville; daughter, Hollye Corder and husband Eric, of Huntsville, AL, and their sons Andrew, Payton, and Lane; and "adopted" daughter, Linda White, of Weaverville, NC; sister, Lillian Bundy, of Erwin, TN; sister-in-law, Nell Fender, of Asheville; and a number of nieces and nephews. A funeral service for Mrs. Rains will be at 2:00 p.m. Saturday in the Groce Funeral Chapel on Patton Ave. with the Rev. Keith Hutchinson officiating. Burial will follow at Forest Lawn Memorial Park. Her family will receive friends one hour prior to the service at the funeral home. The family would like to express their appreciation to Cancer Care of WNC, Advanced Home Care, and to the John F. Keever Hospice Solace Center. Memorials may be made to the Freedom Baptist Church Building Fund, 425 Rice Rd., Asheville, NC 28806, or to the Williamson Fund c/o Cancer Care of WNC, 445 Biltmore Ave. Suite 100, Asheville, NC 28801.