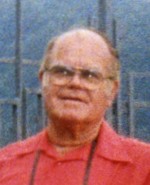 Lloyd Eugene Reed, 78, of the Reynolds community, died on Saturday, May 9, 2009, at Memorial Campus, Mission Hospitals. A native of Buncombe Co., Mr. Reed was a son of the late Emmett and Lucy Stroupe Reed. He was also preceded in death by his son, "Kenny" Reed, and brothers, Kenneth and Morris Reed. He was a former employee of Sayles Biltmore Bleacheries, of Asheville, for over 40 years. He was a veteran of the U.S. Army, serving as a Private 1st Class C.E. He is survived by daughter, Linda Davis; son, Danny Eugene Reed and wife Janet; 3 grandchildren, Shannon Davis, Chad Davis and wife Patty, and JoAnn Reed; great-granddaughter, Chloe Davis; sisters, Doris Rice and Betty Jean Lanning; a loving aunt, Helen; and his longtime companion, Lucille Chandler, all of Asheville. A funeral service for Mr. Reed will be at 2:00 p.m. Tuesday at Groce Funeral Home on Patton Ave with the Rev. Lester Crayton officiating. Interment will follow at Gashes Creek Baptist Church Cemetery, with military rites performed by the Buncombe Co. Veteran's Council. His family will receive friends from 7:00 to 8:30 p.m. Monday at the funeral home, and at other times, will be at Doris Rice's home, 273 Mills Gap Road.