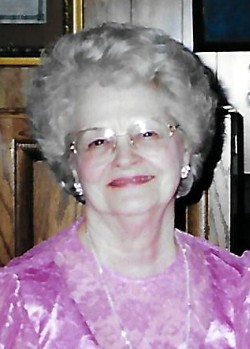 Martha was born March 23, 1928, in Buncombe County to the late Fred and Millie Foster. She was preceded in death by her husband of 68 years, Norburn C. Hyatt; infant daughter, Machelle Lynn; sister, Fredriece “Tooter” O’Kelley (Dewey James) and both of her brothers Charles (Nancy) and Billy; son-in-law, Bill Kulseth; and by her husband Norburn’s siblings and their spouses.

Martha worked for many years for the Asheville Merchant’s Association after graduating from Asheville Biltmore College. Martha was a member of the DAR (Daughters of the American Revolution) and Biltmore Chapter No. 38 Order of the Eastern Star. She served in many offices of Eastern Star, including Worthy Matron. She was very proud of having served as Grand Ruth for the State of North Carolina Order Eastern Star.

The graveside service will be held at Mt. Pisgah Baptist Church Cemetery at 11:00 a.m. on Saturday, May 16.

In lieu of flowers, donations may be made to a charity of one’s choice.