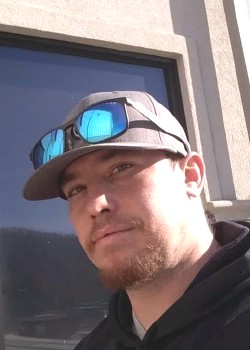 Roy was the son of “Big” Roy Banks of Tennessee, Kim Alfieri Watson and Shelby Watson of Asheville, NC. He is also survived by his inseparable “ride or die” sister, Samantha Watson Dixon; along with his brother, Josh Banks and sister, Siana Banks; grandparents, Pat Alfieri and the late Chuck Alfieri, Ray Banks and Judy Smith; along with many aunts, uncles and cousins.

Roy grew up in Asheville where he attended Erwin High School. His love for his niece, Kenzie, was beautiful and sincere. Roy had a smile that was unforgettable and genuine. The bond Roy shared with his mom is undeniable. The word Stepdad is not enough to express the relationship Shelby and Roy shared as it was led by a dad’s security and protector of being his parent. So many have witnessed his hard work ethic and willingness to help others when he saw the need. Roy enjoyed days on the river with his father, Big Roy. Fishing was among the fondest of his memories. Roy, along with his 2 cousins, John Spurrier and Vinny Alfieri, were deemed the 3 Stooges by their late Grandpa Chuck. Although Bruisy will no longer be able to cause mischief rest assured Stoney and Clutz will continue their legacy… Vinny did it.

It is important for his Family to express that Roy was more than his struggles and his life choices. They did not define his true self. Too bad he couldn’t use his favorite Hero, Batman’s powers to help break his addiction.

“Love fiercely and deeply” are words that Roy would want to remind you to live by.

An Honoring of the Life of Roy will be held at 1:30 p.m. on Sunday, February 20, at Groce Funeral Home on Patton Avenue.