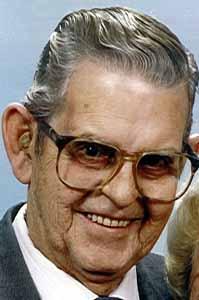 Webb L. Morgan, 75, of 333 Hi-Alta Ave., went to be with God at great sacrifice to his family on Christmas Eve. He was born in Buncombe County to the late Edgar and Iona Reece Morgan. He was a member for over 30 years at Sunrise Baptist Church, where he served as a Deacon, and Sunday School Teacher. He was currently a member of Cumberland Avenue Baptist Church. He was a retired supervisor from American Enka. He is survived by his wife of 53 years, Lottie Galloway Morgan; two daughters, Jana Morgan Bagamary and Dawn Morgan Shuler, both of Candler; three special adopted nieces, Aretha Sales, Joan Jones and Sara Moore, a sister, Lula Brown of Asheville, three grandchildren, Lauren Shuler, Zachary and Mitzi Bagamary, and several nieces and nephews. Funeral services will be held Monday at 11:00 AM in the chapel of Groce Funeral Home on Patton Avenue, with the Revs. Enoch Ball, Earl Jones and son-in-law, Evangelist David Shuler officiating. Burial will follow in Green Hills Cemetery. The family will recieve friends Sunday evening from 7:00-8:30 at the funeral home.