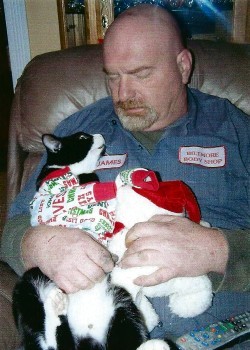 James Ernest McMahan, 51, of Asheville, died on Monday, October 12, 2015, at his residence. A native of Yancey Co., Mr. McMahan was a son of Hubert and Shelba Jean Howell McMahan. He was preceded in death by his brother, Michael McMahan, and nephew, David McMahan. Mr. McMahan worked in auto repair and painting for 36 years, and he loved every second of it. In his time away from work, he enjoyed motorcycles and trucks, working in the yard, camping, going to rodeos, and going to Garden City, Myrtle Beach for the seafood. Mr. McMahan had attended Gashes Creek Baptist Church. He was everybody's go-to guy. Whether it was a co-worker, a neighbor, a friend, or a family member, they knew they could call James and he could help with any problem. He was especially helpful to his mother and father and made sure they were always taken care of. In addition to his parents, Mr. McMahan is survived by his wife, Tonya Buckner McMahan; sons, Brenden James McMahan and Tyler Ryan Buckner; sister, Sherry Carter and husband David; brothers, Tony McMahan and wife Debra and Gerald McMahan; niece, Tiffany Carter Collins and husband Joey; nephews, Chris McMahan, Joshua McMahan and wife Crystin, and Jonathan McMahan and wife Angie; a number of great-nieces and nephews; mother and father-in-laws, Janice and Johnny Littrell, and Tom and Susan Buckner; brother-in-law, Ryan Buckner and wife Sherri, and their children, Madison and Chase; Godson, Kason Charles Treadway; and his beloved cat, T-Tat. A funeral service for Mr. McMahan will be at 11:00 a.m. on Thursday at the Groce Funeral Home chapel on Patton Ave. with the Rev. Chuck Waldrup and Pastor Ed Jennings, of Gashes Creek Baptist Church, officiating. Interment will follow at Green Hills Cemetery. His family will receive friends from 6:00 to 8:00 p.m. Wednesday evening at the funeral home. Flowers are appreciated, or memorials may be made to the American Cancer Society, P.O. Box 22718 Oklahoma City, OK 73123-1718.