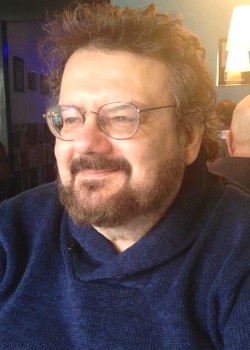 Rick McDaniel, 61, of Asheville, slipped the bonds of this earth suddenly and unexpectedly June 26, 2020.

The son of Joe and Josie McDaniel of Kings Mountain, he was a true Southern raconteur, a genuine wit who could talk about any subject and make it fascinating and funny. He was best known as a culinary historian of Southern foodways, food columnist and dining critic, whose works appeared in the Asheville Citizen-Times and Gaston Gazette. He was the author of two books, “An Irresistible History of Southern Food: Four Centuries of Black-Eyed Peas, Collard Greens and Whole Hog Barbecue” (History Press, 2011, still available in paperback) and “Asheville Food: A History of High Country Cuisine,” also still in print, with a forward by his dear friend Julie Stehling.

Rick worked in journalism his entire career, starting with his roles as managing editor and photo editor of The Carolinian during his time at Western Carolina University. He did a stint as an Associated Press photographer.

His accomplishments were many. He was a self-taught chef who studied his craft in a scholarly manner. He collected many Southern and family recipes, available on http://www.chefrick.com, including his Aunt Ruth’s World Famous Sweet Potato Pie, which literally has been baked and savored around the world, judging from correspondence he received thanking him for the recipe. No one who dined at his table ever went away hungry or disappointed. He was an outstanding baker as well.

He was proud of his accomplishment as an Eagle Scout. He formerly served as a lieutenant on the Kings Mountain Rescue Squad.

Beyond all this, Rick was a gentle soul and a friend to all. He was an historian as well, with a wide breadth of knowledge.

Blindness changed his life in so many tragic ways when he was only 39 years old.

Rick was beloved by too many friends to mention but we will name some particularly dear to his heart, including Saundra and Hughes Grogan, Royce and Maria Smith, Maranda Everson, Leslie Hammond, John Masters, and John and Julie Stehling. And all of his friends at IFB.

Graveside services will be held at 4:00 p.m. on Friday, July 3, at Riverside Cemetery.

In lieu of flowers, the family requests that donations be made to blindness research at Johns Hopkins University Institute for Basic Biomedical Sciences, 855 North Wolfe Street, Rangos 550, Baltimore, MD 21205, www.hopkinsmedicine.org/institute_basic_biomedical_sciences 443-287-0581.