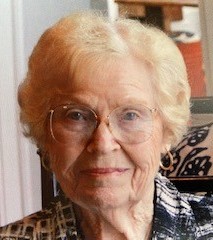 In 1917, the United States entered WW I, the National Hockey League was founded, Woodrow Wilson was inaugurated for his second term, the US mail rate increased to 3 cents, the first woman member of the US House of Representatives was elected in Montana, and New York State gave women the right to vote in state elections.

In Oriental, NC, a more significant event occurred with the birth on January 2, 1917, of Sybil Louise Silverthorn to the late Samuel L. and Hattie Dowty Silverthorn. After almost 103 years, Sybil peacefully passed during the night of November 29, 2019, in Asheville.

She began teaching math and science in 1936 at Barnardsville High School. Over the next 43 years she educated middle and high school students at Flat Creek, Fort Myers, FL, Hall Fletcher, West Buncombe, and Erwin High School. During her summer breaks, she served as a demonstration teacher at WCU’s lab schools in Cullowhee and later taught math extension courses for WCU.

Sybil was married to fellow educator, Randall Duckett, for 48 years until his death in 1988. For the 1955-56 academic year, they each were awarded a Ford Fellowship to study secondary and college education in five states in four regions of the U.S. and to visit national parks and other historic sites. They received additional funding so that their children could be included in their fellowship travels. Sybil’s top honor was being selected the North Carolina Educator of the Year in 1972. She officially retired January 31, 1979, after serving five years as the math coordinator for the Buncombe County School System.

She later married Malcolm Gamble and they spent 30 years together until his death October 19, 2019.

Many know her as Mrs. Duckett or Sybil, others as, Mrs. Gamble. Her grandchildren and great-grandchildren call her Mamaw Sybil, and her two children proudly call her Mom. She is survived by her daughter, Laura Duckett (Jim Kangas), Laura’s two children, Kris Newton (Chris Klein), their two sons and Randy Newton (Amber Newton) and their daughter and son; her son, Tom Duckett (Paula Duckett), their two children, Amy Corcell (Mike Corcell) and their two sons and daughter, and Zac Duckett (Annie Duckett) and their son and daughter.

A memorial service to celebrate Sybil’s life will be held on Saturday, December 14, at 4:00 p.m. in the Patton Avenue chapel of Groce Funeral Home with the Rev. Nancy Dixon Walton officiating.

Because of how much Sybil and her first husband valued education, The Randall and Sybil Duckett Endowed Scholarship, was created at Western Carolina University in 2017 to benefit both education students and teachers from Buncombe County Schools. In lieu of flowers, the family requests that memorials be directed to the Randall and Sybil Duckett Endowed Scholarship at the Western Carolina University Foundation, 1 University Dr., 201 HF Robinson Administration Building, Cullowhee, NC, 28723, or to http://give.wcu.edu/duckett.