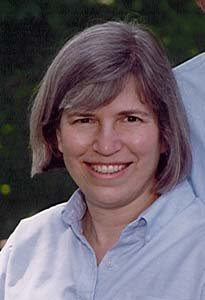 Mrs. Lazar was born in Canton, OH, received her B.A. degree in Natural Sciences from Case Western Reserve University, and attended graduate school in Cartography at Syracuse University. She and her husband were former residents of Raleigh where she worked with the NC Department of Environmental Resources and Community Development as a cartographer mapping the mineral resources of North Carolina.

In 1979 they moved to Asheville and she began her career with the US Department of Commerce, National Oceanic Atmospheric Administration (National Environmental Satellite Data Information System) and National Climatic Data Center as a computer Data Base Management Specialist. In 1997-1998 she was loaned to the US Department of Agriculture Water and Science Center, Portland, OR, as a consultant for climatic metadata, where she developed databases for snow monitoring systems in the high altitude regions of the Western US.

In commemoration of her twentieth anniversary with the National Climatic Data Center she received a commendation recognizing her as the “foremost government authority on weather station information management”, citing her “sustained outstanding contributions in the field of climatic metadata”. The citation continued: “Her efforts contributed significantly to the National Climatic Data Center’s ability to interpret historical data for global climatic monitoring. No individual has ever helped so many people, so much, in the field of observing station history, documentation, and research.”

In addition, Anne was a member of St. Joan of Arc Catholic Church, where she was active in music ministry, especially the choirs, the Liturgical Commission, as a lay speaker, and many other aspects of church education and liturgical events.

Above all, she was a loving wife and devoted mother, and is survived by her husband, Daniel P. Lazar; two sons, Michael S. Lazar and Zachary A. Lazar, both of the home; her parents, Karl L. and Margaret Pintur Viront of Canton, OH; and two brothers, James K. Viront and Michael J . Viront, both of Canton,OH.

A Mass of Christian Burial will be celebrated by the Reverend John M. Pagel at 1:00 pm Friday at St. Joan of Arc Catholic Church. Interment will be at Lewis Memorial Park.

Mrs. Lazar will remain at Groce Funeral Home on Patton Avenue until being taken to the church Thursday evening where a Rosary will be recited at 7:00 pm, after which her family will receive friends.