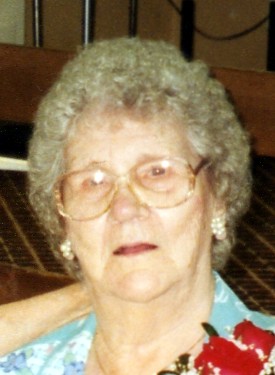 Annie I. Jackson Smith, 92, of Candler, went to be with the Lord, Monday, December 13, 2004, at Pisgah Manor Nursing Center. A native of Buncombe County she was the daughter of the late Andrew and Lillie Allen Jackson. She was married to Troy W. Smith, Sr., who died in 1974, and she was a charter member of Beaverdam Freewill Baptist Church. She is survived by four daughters and their husbands, Claudine and Jimmy Reese of Candler, Peggy and Howard King of Leicester, Debbie Henson of Candler and Clara Herron of Candler; three sons and their wives, Jackson and Carolyn Smith of Mill Springs, Troy Smith, Jr. and Bobbie of Nebo and Roy and Sue Smith of Candler; twenty-one grandchildren, forty-four great-grandchildren and eight great-great-grandchildren. Funeral services will be 2:00 p.m. Thursday at Beaverdam Freewill Baptist Church with the Revs. Tommy Crowe, Robert L. Jackson and Robert E. Harris officiating. Burial will be in the church cemetery. Her family will receive friends from 7:00 - 8:30 p.m. Wednesday at Groce Funeral Home on Patton Avenue.