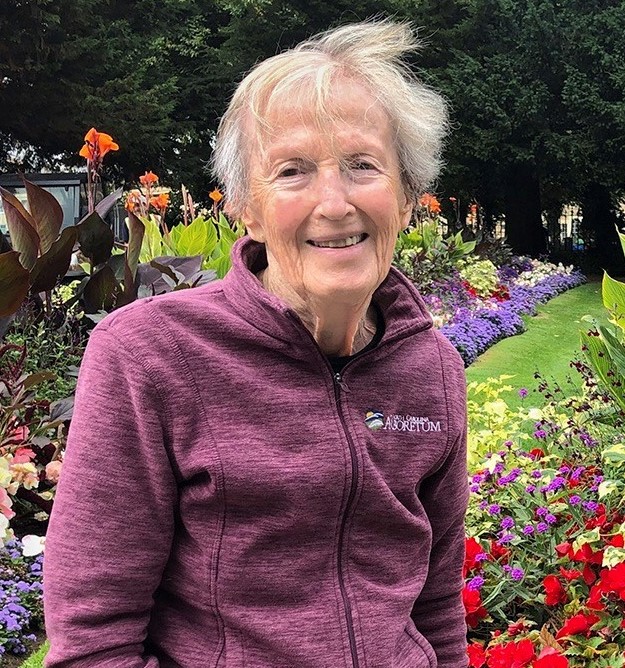 Mrs. Berggren was born in Manchester, England to the late Tom and Amy Johnson Wolfenden. She was also preceded in death by her husband, Douglas Berggren; two brothers, James Wolfenden and Michael Wolfenden and a sister, Ann Russell.

Barbara Berggren was an incredibly kind and compassionate woman whose will was an indomitable force of nature. She also loved the outdoors and flowers and her appreciation of natural beauty sustained her throughout her life, especially in her later years.

Her parents, Tom and Amy Wolfenden were both teachers of mathematics and they passed on their talents in this field to my mother, who later shared them with her grandchildren. She received a scholarship from the town she grew up in to attend, starting at age 12, Wycombe Abbey Boarding School in Buckinghamshire, a private school that prided itself on schooling for character. At Wycombe Abbey, she took up Lacrosse, which she continued to play when she enrolled in Saint Ann’s College at Oxford. There she met her future husband, Douglas Berggren, singing madrigals and playing recorders. When she was twenty years old, she left England to start a life with him in the United States. At the time, it cost a week’s worth of groceries to call home to her family, so she only spoke with them once a month. After relocating, she transferred to London University to complete her degree remotely. An article in her hometown paper published soon after she moved began with, “Promising future derailed by love.” However, our mother would never have described her future as derailed, as she remained married to our father for sixty-two years until his death in 2017. She adored her children, grandchildren, and great grandchildren.

As an independent and brilliant woman, she managed to have many careers outside the home, while still being devoted to her family. In 1958, they moved to Hamden, Connecticut, where her husband took a job at Yale and she promptly found a job in the library, which she continued until her first child was born. In 1964, they relocated to Sarasota when our father accepted a position to teach philosophy at New College.

When we were very young, she tutored students in math in their homes. Then she taught math in a private school for several years before accepting a position in a public elementary school, where she also got trained as a bus driver to take students on field trips. When we were old enough to be left on our own after school, she accepted a job as Personnel Manager for the Ringling Museum of Art. She loved working with people and helping to solve problems and she always appreciated art. After her position at Ringling, she became Student Business Manager at New College, where she remained for over four decades. At her retirement party, an open mike event was organized and many current and past students and faculty attended. Those present were asked to step up to the mike and begin their comments with “The reason I love Barbara is…” She was so beloved by the students that she was asked to speak at the graduation ceremony that year.

In 2009, mother had a massive stroke. Fortunately, she was visiting a close friend in the hospital when it occurred and she was able to receive the clot busting drug, tPA. After spending three weeks in the hospital, she relearned how to walk and talk with the help of therapists and her family and made a 95% recovery. Her speech center was compromised and her right side remained weaker for the rest of her life. Mother’s determination to regain her independence after this event was remarkable. For example, she went to New College and walked up and down the steps at Campus Hall every day, because those steps had a giant and sturdy railing. Her dedication to maintaining her mobility motivated her to work with physical therapists until a few years ago, when she began a serious decline due to compromised oxygen levels from diastolic heart failure.

The year after her stroke, she asked me to accompany her to see my aunt in Tempe, Arizona and then she asked me to take her to Sedona. There was a trail behind our hotel that was quite steep, but she wanted to hike up it to get a closer look at the buttes and spires. I was pretty nervous taking her up the trail and I kept thinking that my father would kill me if anything happened to her. Finally, I told her to stop and wait for a moment while I quickly went to the top to see if the trail leveled out or if we should turn back. It did indeed level out and was beautiful, so I agreed to take her the rest of the way. The path was challenging, but she persevered and when she got to the top she threw her arms up in the air in a V for victory. We were both laughing and crying. This story epitomizes her strength, courage, and determination.

In 2017, her husband passed away and a few months later, part of the roof of her house was torn off by a hurricane and the house lost power for a week and became inundated with black mold. We had to get everything out of the house she’d lived in for over 50 years in a single week. It was, of course, quite traumatic. She made the decision then to move to North Carolina and we were fortunate to find her an independent living villa at Givens Estates. While she lived in independent living, she enjoyed attending all the classes, concerts, and talks and she made many wonderful friends. As her condition deteriorated, she moved to Assisted Living and then to Skilled Nursing. Throughout her time at Givens, I took her for near daily walks outside. Her face lit up, even if she was having a bad day.

Mother’s later years were challenging due to the progression of her heart failure, but she always responded to kindness with love and to nature with gratitude. She was blessed to have so many wonderful caregivers throughout her time at Givens and especially at the end and we will be forever thankful to them. Those who could see and understood my mother’s true nature, even through her vascular dementia, realized how full of love she truly was.

Mom held on for several weeks as she entered the dying stage. She passed in the last hour of her wedding anniversary and after mine and Dave’s wedding ended and the guests had left, creating the perfect circle of life. She did not transition until we returned and spent one last time sitting with her, perhaps so we’d know that she didn’t die during our ceremony.

She will remain in my heart and the hearts of so many always. Godspeed mom. You are deeply loved.

A memorial service was held at the Norma F. Pulliam Chapel at Givens Estates on 6, September at 2:00 pm.

A private Graveside Service will be held at Calvary Episcopal Churchyard at a later date.

In lieu of flowers, donations can be made to the American Heart Foundation.