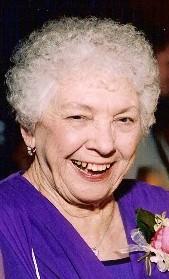 Belle Veda Patterson Ledbetter, of Asheville, died on Friday, May 9, 2008. Belle was born on July 17, 1920, in East Flat Rock, NC, to Robert Milton Patterson and Bessie Mae Edney Patterson. The first thing people often noticed about Belle was her smile; ever-ready, sunny, and infectious. She made friends easily and was beloved by many. She loved to dance, travel, cook and host gatherings. Above all, she enjoyed fellowship with family and friends and she was a superb hostess. Many of her hobbies were self-taught such as crocheting, knitting, needlepointing, and music. Always interested in learning new things, she taught herself to play the organ in adulthood often entertaining at family events. Belle graduated from Lee H. Edwards High School in 1938, and shortly thereafter began working at Southern Bell, where she eventually met her husband, Everette Oden "Pete" Ledbetter in December 1941. They were married at Calvary Episcopal Church in Fletcher, NC, on August 2, 1942. She was preceded in death by her husband, Pete, April 17th, 2004. Belle worked for the State of North Carolina for 18 years. She was with the City School System for four years and worked in various departments in the Buncombe County Court System, from which she retired as Assistant Clerk of the County Court. She and her husband Pete built their home in Arden in 1975, on the same property where Pete was born and his childhood home once stood. Belle loved roses, and grew many varieties of fruits, vegetables and flowers in their gardens over the years. For the last two years, Belle has been a resident of Deerfield Episcopal Community. Over her lifetime she contributed in many and varied volunteer, church and social activities. She was interested in and participated in many groups such as the Lady Bugs' Shriner Auxiliary; she served in many Episcopal Church parish capacities, and on Western NC Diocesan committees. Belle was an avid member of Red Hat Society groups. She is survived, and will be missed, by her daughter, Sandra "Sandy" Lou L. Weaver and husband Donald R. Weaver, of Charlotte and Myrtle Beach, S. C.; and, her son E. O. "Rette" Ledbetter, and wife, Lynn J. Ledbetter of Atlanta, GA; grandchildren: Aimee Weaver Ertley and husband Lawrence of Norcross, GA; William W. Weaver, a student at American University Law School ; Elizabeth L. Baggett and husband, Brooks, great-grandsons Tucker and Carter Baggett of Duluth, GA; and, Katie L. Ledbetter of Decatur, GA. A memorial service for Belle will be held at All Saints Anglican Church, 15 McDowell Rd., Mills River, NC on Friday, May 16 at 2:00 p.m. with the Rev. Fr. Paul Blankinship officiating. In lieu of flowers memorials may be made to Shriner Children's Hospitals, c/o Oasis Mountain Buggies, 43 Forest Hill Drive, Asheville, NC 28803.