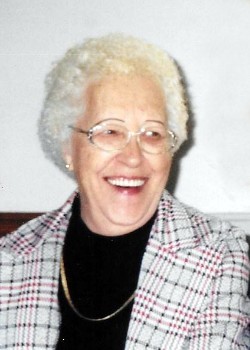 A native of Madison Co., Belvie was a daughter of the late Horace and Lula Moore Brown. She was also preceded in death by her husband of 61 years, Gordon James King; sisters, Velvie Brown Shook, Osie Breece, Dorothy Clark, Artie Johnson, Stella Novak, and Novie Messer; and brother, Everett Brown.

Mrs. King retired from Square D after 31 years of service. In her free time she loved cooking, canning, and worked in her garden.

The funeral service for Mrs. King will be held at 2:00 p.m. on Thursday at the Groce Funeral Home chapel on Patton Ave. The Rev. Ed Jennings and Rev. Allen Rash will officiate. Interment will follow at Jones Valley Baptist Church Cemetery.

Her family will receive friends for one hour prior to the service at the funeral home.

In lieu of flowers, Mrs. King’s family asks that donations be made to assist them with funeral and medical expenses to Max King, 51 Solid Rock Dr., Leicester, NC 28748.