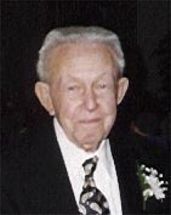 Arden - Bernie Riddle, 89, of Weston Road, died Saturday, December 7, 2002. A native of Yancey County, he was a son of the late John and Cora Bailey Riddle and was also preceded in death by four brothers, Earl, Blake, Clifton and Troy Riddle. He was the former co-owner of Riddles Grocery Store with his brother and the manager of Hickory Nut Gap Farm, for 27 years, for the late James McClure Clarke. He was a wonderful father and husband and is survived by his wife of 67 years, Irene Bailey Riddle; three children, his son, Ken Riddle, and his wife Sandra, of Fountain Inn, SC and their children, Travis Riddle, and his wife Denise, of Simpsonville, SC, Erin Williams, and her husband Chet, of Mauldin, SC; his daughter, Lois Minish of Asheville and her children, Chuck Minish, and his wife Karen, of Apopka, Florida, and Kevin Minish of Hendersonville; his daughter, Joyce Cordell, and her husband Bill, of Arden and their children, Traci Ray, and her husband Larry of Fletcher, Dana Sprouse, and her husband Joel, of Fletcher and Jenny Hepler, and her husband David, of Woodbridge, Virginia. He is also survived by thirteen great-grandchildren. Funeral services will be held at 2 pm Tuesday in the chapel of Groce Funeral Home at Lake Julian conducted by the Revs. Ryland Whitehorn and Jerald Willingham. Interment will follow at Calvary Churchyard. Pallbearers will be Kevin Minish, Chuck Minish, Travis Riddle, Chet Williams, David Hepler, Joel Sprouse and Larry Ray. His family will receive friends from 7 until 8:30 pm Monday at the funeral home on Long Shoals Road and at other times will be at the home of his daughter, Joyce, 33 Coventry Woods Drive, Arden. The family would like to express their sincere appreciation to the staff of Elizabeth House for their care and kindness. Memorials may be made to The Elizabeth House, 511 S. Allen Road, Flat Rock, NC 28731.