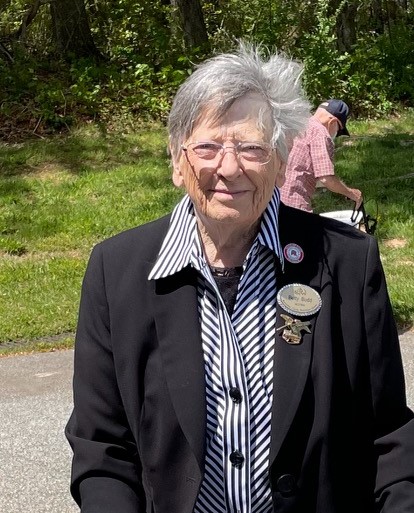 Born in Achillis, KS and raised in Atwood, KS, she was the wife of the late Thomas Dwight Budd, and the daughter of the late Danny Lawrence and Mildred Elsie (Knudson) Raber.

She was a member of Biltmore Bible Church.

At an early age, she learned the value of nurturing land, the importance of community, and the importance each of us has to the duty of our country. Betty will be remembered for her contributions to many programs locally and nationally:

**Taught and led in the Detroit, Michigan and Asheville school systems,

**Voted Woman of the Year by the NC Federation of Republican Women,

**Elected as a delegate for the National Convention of the Republican Party, and

**Awarded the Governor’s Long Leaf Pine, a prestigious recognition for those who have made significant contributions to the state and local communities through exemplary service and exceptional accomplishments.

Not only did Betty serve with her time, but she also served her community through music. Those who knew Betty, especially her family, were blessed by her musical talents, which we enjoyed hearing as much as she enjoyed playing on her golden baby grand piano.

Betty is survived by two daughters: Elizabeth Budd of Asheville, and Laurie McIntosh (Jimmy) of Mooresville, NC; two grandchildren: Saxon B. Webb of Asheville and McKenzie Crippen (Clay) of Fuquay -Varina, NC; two great grandchildren: Hudson and Foster Crippen; a sister, Judy Sweeney of Cockeysville, MD; a special nephew, Sean Sweeney (Ruth); and a number of nieces and nephews from Thomas’s side of the family.

We will miss our mother and grandmother greatly, as will her many friends who have expressed their appreciation to us. We thank God for sharing Betty with us.

A memorial service will be held at 11:00 AM on Saturday, January 28, 2023 at Groce Funeral Home at Lake Julian with Father William J. Martin officiating. Friends will be received one hour prior to the service at the funeral home.

In lieu of flowers, memorial contributions in Betty’s memory may be made to the Epilepsy Foundation of North Carolina online at www.epilepsync.org or to National Multiple Sclerosis Society online at www.nationalmssociety.org.