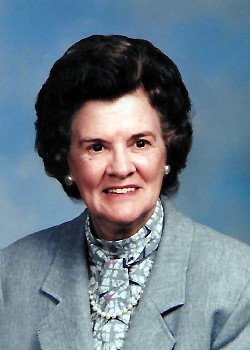 Betty Sarah Randall Rogers, 96, of Leicester, passed away peacefully at home on Sunday, October 8, 2017. A native of Buncombe Co., Betty was a daughter of the late Leslie and May Penley Randall. She was also preceded in death by her husband, Glenn F. Rogers. Mrs. Rogers worked as an auditor for the U.S. Postal Service in the Grove Arcade. She was a former volunteer at Mission Hospital, volunteering as a discharge escort, and she was also a member of Bell United Methodist Church. Mrs. Rogers was devoted to her family and was loved and will be deeply missed by all who knew her. Surviving are her son, Richard "Rick" Rogers and wife Vickie, and Jerry Rogers; grandchildren, Mark Rogers (Amanda), Beth Rogers, and Erica Ratterree (Jason); and great-grandchildren, Reagan and Will Ratterree. Funeral services for Mrs. Rogers will be held at 2:00 p.m. on Wednesday in the Patton Ave. chapel of Groce Funeral Home, with the Rev. David Green officiating. Interment will follow at Bell United Methodist Church. The family will receive friends one hour prior to the service on Wednesday.