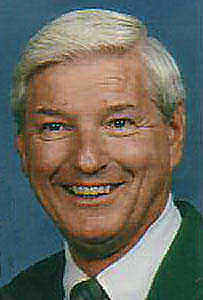 Bobby Eugene "Bob" Brown, 72, of 38 Dixon Terrace, Candler, went to be with the Lord Wednesday, December 31, 2008. Mr. Brown was a native of Buncombe County and was a son of the late Frank and Amanda Vaughn Brown. He was also preceded in death by brothers, Frank Brown, Jr. and Jimmy. He was a former salesman with Deal Buick and more recently owned and operated Bob Brown's Auto Sales in Candler. He was a member, deacon, and Sunday school teacher at Deaverview Baptist Church, where he had served in various capacities. He was a member of the Lions Club, the Toastmaster's, and former president of the Enka Boosters. He had received a number of sales awards during his career. He is survived by his wife, Judith Hixon Brown; three sons, Bobby E. Brown, Jr., and wife, Sharon, of Candler, Steven Brown and wife, Rhonda, of Hendersonville, and Jeffrey Brown and wife, Donna, of Asheville; one sister, Sharon Norton and husband, Benny, of Candler; one brother, Jack Brown and wife, Peggy, of Asheville; five grandchildren and one great-grandson. The funeral will be at 11:00 a.m. Saturday in the Patton Avenue chapel of Groce Funeral Home with the Rev. Darryl Searcy officiating. Entombment will follow at Pisgah View Memorial Park Mausoleum. The family will receive friends from 7:00 to 8:30 p.m. Friday at the funeral home. Memorials may be made to Deaverview Baptist Church, PO Box 6112, Asheville, NC 28816.