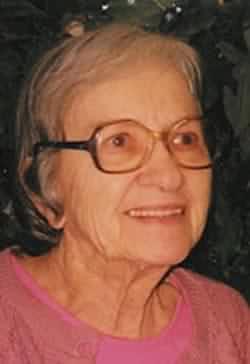 Boots Hagie Clevinger Clark, 88, formerly of 24 Roberts Drive, Candler, died Tuesday, January 8, 2002, at Maggie’s Place, 2189 Smoky Park Highway, Candler. Mrs. Clark was born in Elk Park, NC and was a daughter of the late George and Flora Kite Hagie. She was also preceded in death by both husbands, Fon Clevinger who died in 1983 and Curtis Clark in 1996 and three brothers, Glen, Bill and Jay Hagie. She was a former member of First Baptist Church, Asheville, and more recently attended Hominy Baptist Church. Through the years she was active as a Sunday school teacher and in the WMU. She was an avid gardener and a member of several garden clubs. She is survived by one son, Steve Clevinger of Candler; four grandchildren, Thomas Clevinger and Christy of Travelers Rest, SC, Tammy McElroy and her husband Todd of High Point, and Justin and Kevin Clevinger of Candler; two great- grandchildren, Asher and Ariel Clevinger of ravelers Rest; one sister, Tharon McCloud of Limestone, TN; one brother, Hall Hagie of Winston-Salem, NC; Mary Clevinger of Candler and a number of nieces and nephews. Graveside services will be at 2:00 pm Friday at Forest Lawn Memorial Park with the Rev. Dr. Fred Werhan officiating. Her family will receive friends from 12:30 - 1:30 pm Friday at Groce Funeral Home on Patton Avenue.