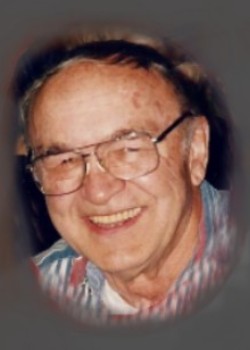 Calvin Moore Jones, 86, of Pressley Rd., Asheville, died Sunday, March 11, 2012. A native of Akron, OH, he was a son of the late Herbert and Georgina Moore Jones. He was also preceded in death by his wife, Nancy Osburn Jones, who died in 1978. Mr. Jones was a Veteran of the U.S. Navy, having served during WWII and Korea. He was a manager of Babe Maloy Drive-In in Asheville. Mr. Jones had 3500 volunteer hours at the V.A. Hospital. He is survived by a daughter, Susan Waldrup and husband Bert of Skyland; a son, Thomas Herbert Jones of Asheville; companion of 33 years, Alice Lanning and her daughter, Diane Borkowski; 5 grandchildren; and 8 great-grandchildren. A graveside service will be held at 2:00 p.m. Thursday at Pisgah View Memorial Park, with Christian Jones, grandson, officiating. Interment will follow at Pisgah View Memorial Park, with the Military Honors provided by the Buncombe Co. Veteran's Council. His family will receive friends from 7:00 to 8:00 p.m. Wednesday at Groce Funeral Home, Patton Ave.