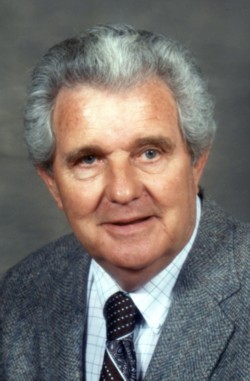 Carl Edward White, Sr., 87, of Johnston Blvd., died on Wednesday, March 10, 2010, at St. Joseph Campus, Mission Hospitals. A native of Buncombe Co., he was the son of the late Hubert and Florence Allison White. He was also preceded in death by his first wife, Aileen Smith White, who died in 1991; a son, Ralph Thomas "Tommy" White, who died in 1992; four sisters, and two brothers. Mr. White was the former Press Room Foreman for the Asheville Citizen-Times, where he worked for 46 years. He was a member of Macedonia Baptist Church. He is survived by his wife, Maxine Owenby; daughter, Brenda Caldwell and husband Danny; two sons, Carl Edward White, Jr., and wife Linda, and Dale Alan White and wife Christy; step-daughter, Ann Lamb and husband Vern; step-son, Rick Owenby; 11 grandchildren, 12 great-grandchildren, and several nieces and nephews. A funeral service for Mr. White will be at 11:00 a.m. on Saturday at Macedonia Baptist Church with the Revs. Charles Phillips, Tommy Dorsey, and Paul Sluder officiating. Interment will follow in the church cemetery. His family will receive friends one hour prior to the service at the church. Groce Funeral Home on Patton Ave. is assisting the family.