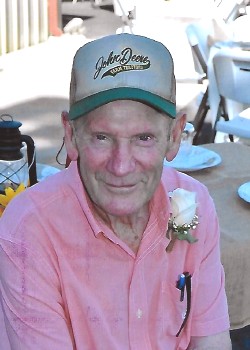 A Leicester native, Carl was the son of the late France and Blanche Teague Gossett. He was also preceded in death by his wife, JoAnn Brown Gossett; son, Roger Gossett; and brother, Wayne Gossett.

Mr. Gossett proudly served his country in the U.S. Army. He later worked with Bell South (later AT&T) for 55 years, retiring at the age of 77. Carl loved his family and loved mowing lawns. He was a member of Beulah Baptist Church

The funeral service for Mr. Gossett will be held at 3:00 p.m. on Sunday, February 13, at Beulah Baptist Church. Pastors Ricky Wolfe and Chad Ellege will officiate. Burial will follow in the church cemetery.

His family will receive friends for one hour prior to the service at the church.

The family wishes to express their thanks to the staffs of Aston Park Health Care Center and of Four Seasons Hospice for the care and compassion they showed to Mr. Gossett.

In lieu of flowers, memorials may be made to the Beulah Baptist Church Building Fund, 929 N. Turkey Creek Rd., Leicester, NC 28748.