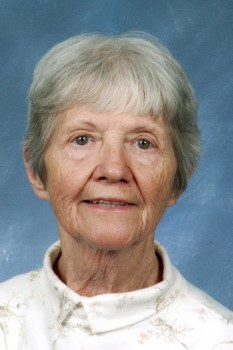 Carolyn B. Burleson, 82, of 30 E. Pinedale Lane, Asheville, died Wednesday, December 23, 2009, on her 62nd wedding anniversary. She was a native of Madison County but lived most of her life in Buncombe County. She was a daughter of the late James and Malinda Buckner Bullman and was the wife of the late Billy B. Burleson. She was also preceded in death by two brothers, Spurgeon and Cairl Bullman and three sisters, Lucy Bullman, Geneva Spillars, and Theora Sumler. Her passions in life were her family, children and the elderly, and all creatures great and small. She loved to travel and had visited all of the 50 states. She preferred to be outdoors and barefoot and was very observant of nature. She was a life-giving and sacrificing person. She shined and stood out among others in the way she lived her life. She was a retired nurse from the VA Hospital after 20 years of service. She is survived by two sons, Jeff Burleson and his wife, Janice, and Darryl Burleson and his wife, Dona, both of Asheville; two brothers, George Bullman of Maryland and Charlie Bullman of Asheville; two sisters, Harriett King Greene of Marshall and Hattie Spillars of Virginia; two grandchildren, Carrie and Travis Burleson, both of Asheville, and several nieces and nephews. A celebration of life will be conducted by the Revs. Tim Lolley and Dr. William D. King at 12:00 noon Wednesday at Beverly Hills Baptist Church, where she had been a member since 1956. Interment will follow at Lewis Memorial Park. The family will receive friends at the church one hour prior to the service. In lieu of flowers, donations may be made to Beverly Hills Baptist Church, 777 Tunnel Road, Asheville, NC 28805, to be used for the Preschool EducationProgram, for which she taught for 30 years. Groce Funeral Home on Patton Avenue is assisting with the arrangements.