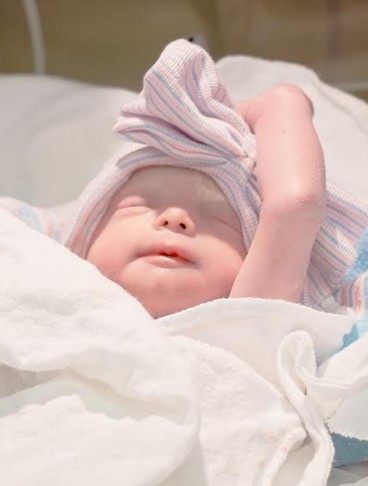 Charleigh Jean Linkin Foy, 117 minutes old, died October 8 in Pensacola, Florida.
Our daughter was born on a Tuesday. They let us hold her. Her brother, Killian, did, too. She was so pretty.
Charleigh was ours for 117 minutes. Her life mattered, and we will talk about her. We will say her name. She is and will be part of our life from now on.
We wanted a little girl, and we got one. Her life in utero was eventful. Charleigh was constantly moving, and we listened to her heart every single night. It was so strong. In fact, her entire life, including her time in utero, is about that strength and the love that surrounded her.
The saddest words ever uttered, in our estimation, are “infant hospice care.” We didn’t expect to hear them, but it became part of our reality in July. We heard other words: “long bones measuring short,” “thin stomach,” “holes in the heart,” “aortic stenosis,” “cysts on the brain” and “Dandy-Walker variant.” Then, on July 31 – 27 weeks and five days into the pregnancy – we learned that Charleigh had something that only occurs in 0.04 percent of pregnancies. She was diagnosed with full Trisomy 18, a condition that “disrupts the normal pattern of development in significant ways that can be life-threatening, even before birth,” according to the Trisomy 18 Foundation.
Charleigh wasn’t supposed to be born alive. So many of these babies die in utero. We woke up every morning knowing that our daughter could die during the pregnancy. We also knew the longer she was in the womb, the chances of us meeting her – even for 117 minutes – were greatly diminished.
So, with the guidance of Charleigh’s doctors, we decided she would be born via C-section at 37 weeks. It was the only way, for sure, that we could meet her. There was beauty and heartache in this decision, but we felt there were a few things we owed her. Our daughter should meet us, even for 117 minutes, and she should experience the world she fought so hard to live in.
We arrived at the hospital with a suitcase packed in the days before Trisomy 18 became part of our lexicon. It was filled with clothes of all different sizes, books we planned to read to her and toys we hoped she would love. Each of those items were bought specifically for Charleigh with love.
When she arrived at 8:42 a.m., we spent the first three minutes begging God to let her breathe. It was in God’s plan, with the assistance of her medical team, that she would begin taking her own breaths. We cut the cord and held her. The hospital staff weighed and measured her. For a short time before 10 a.m., we thought she was doing alright, but we kept a close eye on her breathing.
The former pastor of our church in Asheville, North Carolina, made the trip to the hospital. He brought water from a stream in Buncombe County. Surrounded by our family and elders from a local church, our daughter was baptized. This affirmed what we already knew – Charleigh was a child of God.
The hospital celebrates each birth with the playing of “Happy Birthday.” As the song echoed through the rooms and hallways, Charleigh’s breathing got shallower and shallower. She died in her mother’s arms at 10:39 a.m., 117 minutes after she entered the world.
It was a short but significant life. We will never forget how hard she fought to survive. Our daughter was and is loved. We cherish and celebrate her, and we thank God for giving us the opportunity to be her parents.
The name, Charleigh Jean Linkin, carries great meaning for our family. Charleigh is a modified spelling of “Charlie,” which was the name of her great-great-grandfather, Charlie Claude Huntsinger. Jean is another family name shared by and in honor of Charleigh’s maternal grandmother, Pamela Jean McCurry; maternal great-grandmother, the late Betty Jean Huntsinger; paternal grandmother Patti Jean Proffitt; and paternal great-grandmother, the late Reva Jean Row. Linkin is connected to the band Linkin Park. Not as a chant for a band we like (even though we do), but in honor of the people throughout the world who constantly live with depression. The lead singer of Linkin Park, Chester Bennington, fell victim to the battles with his mental health, and we felt Linkin would honor the millions of people like him fighting a silent struggle every day.
Charleigh is survived by her parents (us), Cale and Amber (McCurry) Foy; brother, Killian Foy; maternal grandparents, Timothy and Pamela McCurry; paternal grandmother, Patti Proffitt, and step-grandfather, John; paternal grandfather, Wes Foy, and step-grandmother, Joan; maternal great-grandparents, A.C. and Lila McCurry; paternal great-grandmother, Katie Foy; paternal step-great-grandmother, Yvonne Proffitt; maternal uncles, Kyle and Evan McCurry; paternal aunt, Katie Watson; paternal cousins, Parker and Evan Watson; and numerous cousins, aunts and uncles. We also remember her maternal great-grandparents, Donald and Betty Huntsinger; paternal great-grandparents, Arvel and Reva Row; and great-grandfather, Charles Foy.
We want to thank Charleigh’s team of doctors, nurses and counselors at Sacred Heart Hospital in Pensacola and Sacred Heart Perinatal in Fort Walton Beach, Florida. We cannot thank them enough for their guidance and for honoring the entire life of our daughter. We would also like to thank the staff of Mossy Head School, the 96th Mission Support Group and the 96th Security Forces Squadron of Eglin Air Force Base for their support over the past months.
A celebration of love will be held in honor of Charleigh Jean Linkin Foy at 2 p.m. Saturday, Nov. 9, at West Asheville Presbyterian Church in Asheville, North Carolina. We ask our guests to wear purple to honor Charleigh’s journey with Trisomy 18. In lieu of flowers, please bring a Christmas toy that will be donated to Eliada in celebration of Charleigh.