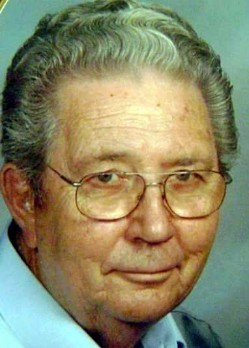 Charles Ray Jackson of Candler, NC passed peacefully from this world on March 11, 2015 at the John Keever Solace Center in Asheville, NC. "There are far, far better things ahead than any we leave behind." C.S. Lewis The amazing love and laughter filled life that "Papaw" leaves behind prepares us for the intense and overwhelming joy that awaits us in heaven. Charles Ray Jackson was born to the late Saxton and Mary McFee Jackson on August 7, 1932 in Candler, NC, and was also preceded in death by his sister Vera Mae DeHart. Many facets and qualities paint the portrait of a full life and the Master himself strokes Charlie's legacy. He was a man of courage serving his country in the U. S. Navy in the Korean Conflict as a Hospital Corpsman of the 1st Marine Division. He retired from CP&L as a Western area load dispatcher in 1988. He was a man with a love of music, singing with the gospel group The Humble Hearts and sharing God's message through song. He was a member at Pole Creek Baptist Church where he was faithful member of the choir as well as the former Sunday School Director and a Deacon. Perhaps most of all, he was a man dedicated to his family. He is survived by his lifelong sweetheart of 63 years, Barbara Metcalf Jackson, his three children, Susan Buchanan (David), Anne Lingelbach (Keith) and Jeffery Jackson (Cindy). His six grandchildren, Amanda, Jared, Brittany, Heather, Charlie and Andrew and three great-grandchildren Aaliyah, Chloe and Elizabeth. The joys of Sunday lunch with "Papaw" at the head of the table asking us to bow our heads to pray illustrates what is important in this life and the inheritance of love and faith that he leaves behind. He is now dining at the table of his beloved Savior today, and we know he has a seat saved for each one of us until we are reunited with him again in eternity. Visitation will be held at Pole Creek Baptist Church from 11:00 a.m. to 12:00 p.m. on Saturday, March 14, 2015, followed by the service at 12:00 p.m. The Rev. Dennis Thurman and Rev. Jackie Collins will officiate. Interment will follow at Forest Lawn Memorial Park with military honors provided by the North Carolina Honor Guard. A special thanks to Dr. John Langlois, Nan Needs, Victoria Frierson, Jay Brown, Katie Brockett, Gretchen Whitt and to all the other dedicated personnel at CarePartners Hospice. Groce Funeral Home on Patton Ave. is assisting the family.