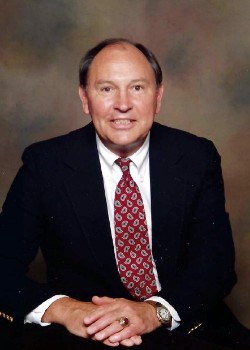 Dick was born in 1936 in Asheville, NC, to the late Leslie E. Davis and Laura Elizabeth Davis. He was born during a terrible snowstorm, his parents could not make it to the hospital, but made it to his grandparents’ home where he was born. He is the oldest of two children, his younger sister Patty lives in Asheville with her husband Ken.

He graduated from Sand Hill High School in Asheville in 1954 where he played basketball, was on two square dance teams and was a member of the Future Farmers of America, all while working on his father’s dairy farm, South View Dairy delivering milk before school with his father and sister.

Dick served in the U.S. Army from 1957-1959. He was part of the Charlie Company, 2nd Battle group, 4th Infantry, as a Squad leader. He was stationed in Fort Benning, GA, and Bamberg, West Germany.

Dick graduated from North Carolina State University in 1964 with a BS degree in Food Science and Dairy Manufacturing and a Business Minor. He loved to follow the Wolf Pack!

Dick was married for 24 years to the love of his life, Bette Lou Cathey. They were married in Greenville, SC on February 7, 1966. They had two daughters, Dana and Cheri.

Dick’s first job was at American Enka Corporation, in Enka, NC, where he worked while attending college. He then got a job at Tetra Pak that moved him to Atlanta, GA. In 2002, Dick eventually retired from Johnson Truck Bodies.

Dick loved to play golf with his church buddies from Embry Hills United Methodist Church. He also loved that he was on the Masters Golf List and enjoyed the tickets for 25 years.

Most of all, Dick loved his grandchildren. He enjoyed going to basketball and football games, and “coaching from the sidelines.”

Family and friends will gather at Groce Funeral Home in Asheville on Friday, March 26th, from 11:00 a.m. to 1:00 p.m. Masks are required. A graveside service will follow at Francis Asbury Church at 2:00 p.m.