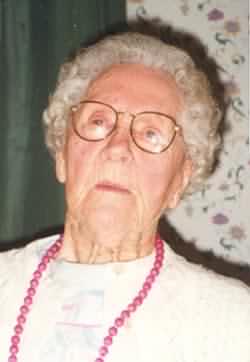 Clara Dalton Evans, 101, of Asheville, died Tuesday, June 5, 2001 at Pisgah Manor Nursing Home. A native of Henderson County, she was a daughter of the late James M. and Annie Bowman Dalton. She was also preceded in by her husband Robert J. Evans in 1973 and a daughter, Ruth E. Rymer in 1981. She was a member of West Asheville Presbyterian Church. Her survivors include her daughter and son-in-law, Catherine E. and Dan W. Campbell of Asheville; sister, Irene Miller of Hendersonville; grandchildren, Kay Campbell of Asheville, Wayne Campbell and his wife Sue of Candler, great-grandchildren, Robie, Jodie and Travis Campbell and several nieces and nephews. Funeral services will be 12:00 noon Friday in the Patton Avenue Chapel of Groce Funeral Home. Revs. Howard Shockley and Dennis Thurman will officiate with burial following in Forest Lawn Memorial Park. Her family will receive friends 7-8:00 p.m. Thursday at the funeral home.