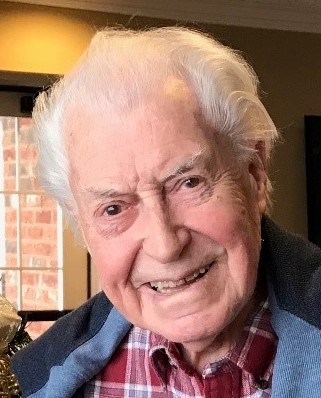 Bob was born in Decatur, Illinois on June 26, 1924 to parents Clarence and Faye Branson and graduated from Decatur High School in 1942. He later went to Harvard University and Wabash College as part of the Navy’s V-12 officers training program and graduated from the University of Illinois with a BA Degree in Marketing in 1948 after his service as an Ensign in the Navy in WWII.

He was married 55 years to the love of his life Nancy Moffat of Aurora, Illinois.

During WWII, as a Supply Corp Officer, he was in the Pacific and at Pearl Harbor shortly after the war. During the summer of 1945, he was stationed in Oakland, CA awaiting orders for the possible invasion of Japan.

One of the love’s in his life was music, taking up the trumpet at the late age of 15. He progressed rapidly and was in 2nd chair of 10 trumpets by the time he was 16 in one of the best High School bands in Illinois. He continued playing trumpet throughout his life in Jazz bands in College and during WWII and later with many bands in Hendersonville. He played and practiced regularly until he was 95.

He also became expert at woodworking, loved hiking in the trails around Henderson County and was active in several hiking groups.

Bob touched many lives in his 97 years as a businessman, friend, father and husband. His nearly constant state of optimism and positivity (HS Photo Description reads “A Magnificent Spectacle of Human Happiness”) resulted in him being loved by so many and he will be dearly missed.

He was predeceased by his parents Clarence and Faye, his wife Nancy, brother Glenn and daughter Sue. He is survived by his son Robert Branson, daughters Nancy Watson and Jill Watson, nephew Van and grandchildren Mallory and Tim.

In lieu of flowers, charitable donations can be made to the Hendersonville Community Band directly or through their scholarship fund at: http://www.hcbmusic.com/education-and-support.html

The family greatly appreciates donations made to these charities in Clarence Robert Branson's name.