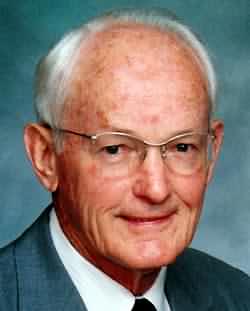 Clyde W. Tilson, 84, of the Haw Creek Community, Asheville, died Monday, May 12, 2003, at the Laurels of Summit Ridge. Mr. Tilson was born in Mars Hill and was a son of the late Fred and Sallie Mae Holcombe Tilson. He was also preceded in death by a son, Clyde Tilson, Jr. He attended Mars Hill College and worked as a shipping clerk with Hayes and Hopson. After that he joined the Army Air Corps, serving during WW II. Following the war he worked for Deal Buick for nine years before joining Electrolux where he stayed for more than 28 years. Mr. Tilson volunteered at Chunn’s Cove Nursing Home for 12 years and he was a former member of the Toastmaster’s Club and Lions Club. He taught Sunday School at Craggy Prison for 16 years and served on the Lay Witness Foundation. He was a charter member of Beverly Hills Baptist Church, having joined November 2, 1952, when it was a mission of First Baptist Church. He was the first Minister of Music and was a former deacon. He is survived by his wife of 61 years, Hazel Gray Tilson; a son, Ray Tilson of Asheville; a sister, Hazel Frink of Asheville and a brother Ernest H. Tilson of Asheville. Funeral services will be at 2:00 pm Wednesday at Beverly Hills Baptist Church with the Revs. Tim Lolly, Bill Snyder and Paul Rayburn officiating. Burial will be at Green Hills Cemetery. His family will receive friends at the funeral home from 7 - 8:30 pm Tuesday at the funeral home and suggest that memorials be made to Beverly Hills Baptist Church, 777 Tunnel Road, Asheville, NC 28805 or to Mountain Area Hospice, P.O. Box 25338, Asheville, NC 28813. The family would like to express their sincere appreciation to the staff of the Laurels of Summit Ridge for the care extended to Mr. Tilson.