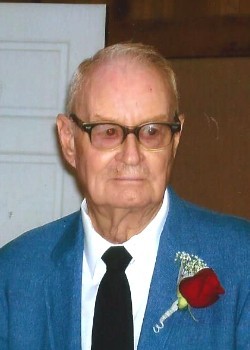 Clyde Waldo Rickman, 84, of Swannanoa, died on Sunday, September 27, 2015, at the Memorial Campus of Mission Hospitals. A native of Poplar Bluff, MO, Mr. Rickman was a son of the late Judson and Effie Rickman. Mr. Rickman was fond of saying that he was, "a jack of all trades, but a master of none." Though according to his family, he was a master cabinet maker, and very talented wood worker. He also loved camping and grilling out, working in the yard on his John Deere, and listening to gospel music. He had been a member of Sunrise Baptist Church. Mr. Rickman is survived by his wife of almost 61 years, Grethel Davis Rickman; children, Marvin Rickman (Elke), Noma Cordell (Robert), Jan Rickman, and Grethel Jane Rickman; grandson, Daniel Rickman; and several siblings. A memorial service for Mr. Rickman will be at 4:00 p.m. on Thursday at the Groce Funeral Home chapel on Patton Ave. with the Rev. Johnny Wright officiating. His family will receive friends following the service. In lieu of flowers, Mr. Rickman's family asks that memorials be made to Mission Foundation, Heart Services, P.O. Box 5363, Asheville, NC 28813.