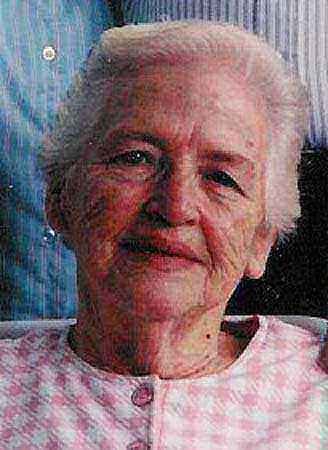 Connie Jones McGonagle, 82, of 141 Big Sandy Mush Road, Leicester, went home to be with the Lord on February 5, 2007. She was the daughter of the late Horace and Lavada Hutchinson Jones and wife of the late Joseph McGonagle. She was also preceded in death by a brother, Lattie Jones. She is survived by one daughter, Sandra King and her husband Wayne; one son, Ronnie Goldsmith and his wife Judy; one sister, Faye Ferguson; one brother, Candler Jones; three granddaughters; one grandson and five great-granddaughters, all of Leicester. Funeral services will be held at 2:00 PM, Wednesday, February 7 at Jones Valley Baptist Church with the Reverend Tom Dorsey officiating. Interment will follow in the church cemetery. The family will receive friends one hour prior to the service at the church. In lieu of flowers, the family requests that memorials be made to the Jones Valley Baptist Church Cemetery Fund, 153 Big Sandy Mush Road, Leicester, NC 28748 or to the Leicester Volunteer Fire Department, PO Box 100, Leicester, NC 28748. Groce Funeral Home on Patton Avenue is assisting the family.