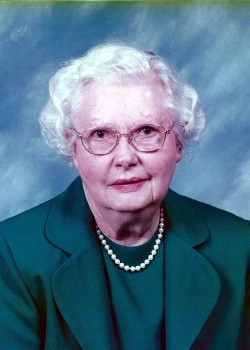 Born in: Boligee, Ala,
Resided in: Asheville, NC

Corajean Thetford Barrett died peacefully Wednesday, Feb. 4, at the John Keever Solace Center. She was 96. Corajean was born in Montgomery, Ala., and grew up in Boligee, Ala. She graduated Phi Beta Kappa from the University of Alabama and completed a one-year graduate program at the School of Public Welfare at the University of North Carolina-Chapel Hill. She was a social worker based in Robbinsville in the early 1940s then spent most of her life as a homemaker in Tapoco and Andrews before moving to Givens Estates late in life. She grew up as a member of St. Mark's Episcopal Church in Boligee and was a member of Skyland United Methodist Church when she died. Faith, family, friends and community were the cornerstones of Corajean's life. She was a Sunday school teacher and Cub Scout leader and volunteered for church efforts and community causes. She had been a member of the Konnaheeta Women's Club in Andrews and Skyland United Methodist Women, among other groups. She was named a governor's volunteer of the year. She was preceded in death by her parents, Dr. and Mrs. Samuel L. Thetford; her husband, James S. Barrett, and her sisters, Kennon T. Fricks and Delphine T. Spree. Survivors include sons John T. Barrett of Sylva; Mark R. Barrett of Fairview; Mark's wife, Lynnie G. Barrett; their daughters Amy Adele Barrett of Boston and Mary Tess Barrett of Freiburg, Germany; and several nieces and nephews and great-nieces and nephews. A graveside service will be held at the cemetery at St. Mark's Episcopal Church in Boligee at 3 p.m. Saturday. In lieu of flowers, memorials may be made to Givens Estates Resident Assistance Fund, 2360 Sweeten Creek Road, Asheville, NC 28803 or St. Mark's Episcopal Church, c/o Thed Spree, 5111 U.S. 11 South, Boligee, AL 35443. Groce Funeral Home in Asheville and Kirk Funeral Homes in Demopolis, Ala., are handling arrangements.