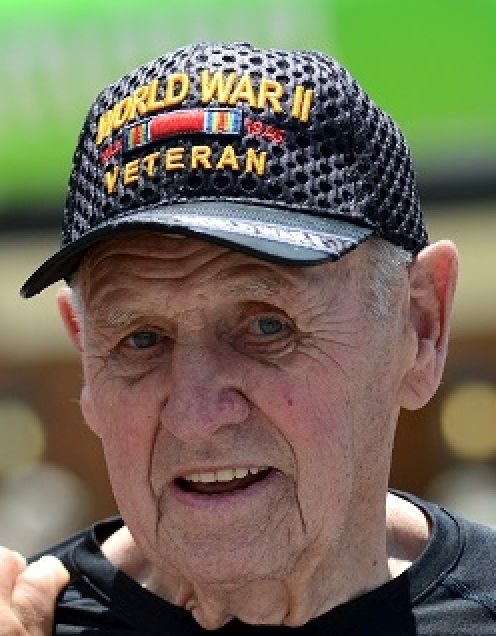 Cornelius E. “Cory” Hartbarger died Sunday, December 6, 2020, in Asheville, NC. Born the youngest of five in Clifton Forge, Va., to Vida Tilley Hartbarger and Cornelius “Neil” Hartbarger, he was known also to family members and childhood friends as Sonny. He grew up as a highly competitive athlete and musician in Clifton Forge and the neighboring community of Waynesboro.

War came and he left school to join the navy, serving in the Pacific Theater during the last stages of World War II.

After his discharge he returned home to finish high school. Following brief stints as a mail carrier, an FBI clerk, and a baseball player with the farm teams for the Brooklyn Dodgers and the Philadelphia Athletics, he joined the Virginia State Police. During this time he met choir director Alice R. McConaughy when his brother James took him to choir practice. Cory and Alice married on August 30, 1951, and established their first home in Buchanan, Va. During that Spring, as a Virginia state trooper he escorted Princess Elizabeth of England, soon to become Queen, on her visit to George Washington’s home at Mt. Vernon. Alice and Cory’s first son, Neil, was born that May.

Determined to have a life with less drama but to continue making a contribution to others, he decided to become a teacher. He attended Northern Michigan University on the VA Bill, where he was a standout athlete, lettering in track and field and scouting for the football team. He graduated in 1955 and went immediately to a position in the phys ed department at New Trier High School, in Winnetka, Il., where their second son, Peter, was born. Several teaching positions took him and Alice to Decatur, Il., where son Christopher was born, and then back home to Waynesboro, Va., where son Stephen was born. From Waynesboro they moved to Bell Buckle, Tn., where they taught for a decade at the Webb School, a prep school founded in 1870. They next moved to Lithonia, Ga., where he became a trainer in the agent-development and certified-life-underwriting programs of Equitable Life Assurance. He retired in 1986, and they moved to a mountaintop home in Bridgeport, Al.

They missed the friendships they’d established in Tennessee, and so they moved back to a home in Shelbyville, where they could rejoin the church community where Alice had directed the choir. During their retirement they stayed in touch with many friends and family members, and made new friends. He also discovered the Senior Games and became a Senior Olympian in his eighties, receiving medals and ribbons in shot put, discus, and javelin. His last competition was in Birmingham, Al., in 2017.

As Alice’s health began to fail, they moved for the last time, to Asheville to be near son Chris and his family. He died in his home, with his sons caring for him during his last days.

Cory Hartbarger is survived by sons Neil, Peter, Christopher, and Stephen, daughters-in-law Juanita, Linda, Legaré, Kim, and Teri, grandson Errol, and granddaughters Emily, Loryn, Colleen, Jessica, and Natalie, and great-granddaughter Sadie, as well as his sister-in-law Mary Esther Cumberland, and numerous nieces, nephews, friends, and children of friends who consider him family. As a teacher his impact extended to shaping the lives of thousands.

At the time of his death he had just learned that his second great-grandchild is on the way.