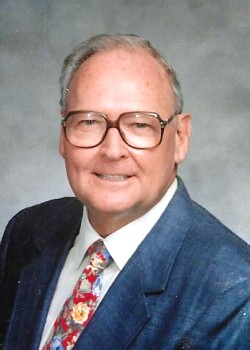 Coy was born in Leicester February 7, 1927, to the late Rev. R.R. and Mrs. Estelle Morgan Mehaffey. He was preceded in death by his wonderful, beautiful wife of 64 years, Clara G. Mehaffey and by eight siblings.

He finished Leicester High School and joined the Army when he was 18. Following basic training at Fort Bragg and Fort McLean, he was sent to Italy and served under General George Patton during WW II.

Following his discharge he earned a bachelors degree in Business Administration. Coy and Clara worked for American Enka, Coy for 35 years in the Engineering and Research Department and Clara in Purchasing and as a private secretary to the department directors.

Coy and Clara were married in 1950 and immediately joined West Asheville Baptist Church, which they actively served, Coy as a deacon and Clara a teacher of teenage girls. They sang in the choir and joined several mission trips.

The couple loved traveling and hosted many trips for Wilcox World Travels. They visited all 50 states, all continents, and most countries.
They hosted Baptist ministers of the Buncombe Association and went to eight Southern Baptist Conventions. They joined the Foreign Mission Board and were sent to Madrid, Spain. They worked with 22 nationalities and co-hosted 212 people on a mission trip to Ukraine and approximately 200 people on a mission trip to Russia.

He is survived by many loving nieces and nephews.

Coy will be remembered as a man of unquestionable integrity, honor, graciousness, intelligence and wit.

Funeral services will be on Thursday, December 5 at 12:00 p.m. at West Asheville Baptist Church, with the Rev. Dr. Stan Welch officiating. Interment with military honors will follow at 2:00 p.m. at the Western Carolina State Veterans Cemetery.

Mr. Mehaffey will lie in state at the church one hour prior to the service.

In lieu of flowers, memorials may be made to West Asheville Baptist Church, 926 Haywood Road, Asheville, NC 28806.