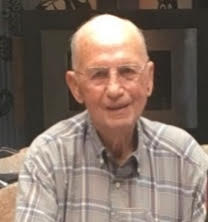 Craig was born September 12, 1929, in Sandy Mush, NC. Craig was the son of the late Pearl Plemmons Jones and Lattie L. Jones, Sr. of Buncombe County. He was also preceded in death by his wife, Frances Elaine Henson, in 1998.

He served in the Navy, on the U.S.S. Buck, and was honorably discharged in 1947 after being awarded medals for Good Conduct, Korea Service and China Service for his duty to our country. He was devoted to his career as an electrician at BASF (American ENKA) for 39 years until he retired. As a long time member of Calvary Baptist Church of West Asheville, he was a devoted Christian.

Craig is survived by his sister, Grace Conrad (Bernie); his children, Sheila E. Jones (Guy Davis) and Craig Lee Jones, Jr. (Debbie); his grandchildren, Nicole Hart (Tom), Jonathan Hunter (Karen), Philip Neely, Parker Neely, and Christopher Webster (Megan); his great-grandchildren and many other beloved family members as he was one of nine siblings in the Jones family.

Memorial services to be announced at a later date due to Covid within the immediate family.

Donations may be made to the WNC Bridge Foundation in his name.