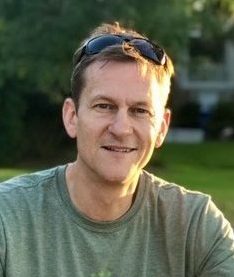 Daniel Summerlin, 50, left this world unexpectedly on June 27th. He will be remembered for his unwavering loyalty, his kind and gentle heart, and his irreverent sense of humor.

Daniel lived life to its fullest. His true sanctuary was the outdoors surrounding his hometown of Asheville and he thrived on the trails, rivers and peaks of the Western NC region. He was a die-hard Tar Heel, despite their being a recent source of disappointment to him. He loved his animals and they adored him. On any given night, there would be four people and four animals in the bed, snuggled together.

He graduated from Asheville High School in 1988. After setting earth shattering numbers on college entrance exams he attended the University of North Carolina at Chapel Hill. He spent his career pursuing success in the field of commercial real estate and recently started his own company, The Summerlin Property Group. His passion for community was evident in his involvement on the board of PivotPoint WNC, which provides safe, supportive, and empowering mindfulness-centered therapeutic wilderness experiences. He also maintained membership for many years in the Brigade of Guards, ultimately serving as Chief-of-Staff.

His greatest passion, though, was his family. Some people only have one great love in their lives. Daniel was fortunate to have had three. His wife, Lizzy, of 17 years, and his two girls Abby and Davies, affectionately referred to as “Abbamuffin” and “D-Dog.” Although Daniel was a humble man, he would proudly boast about his daughters’ warm hearts, adventurous spirits and sweet natures. Clearly the apple didn’t fall far from the tree.

Daniel was an accomplished athlete, competing in countless trail races including conquering the Shut-In Ridge Race ten times, the Squamish 50 in Canada, and the local Hellbender 100. What makes his athletic achievements even more amazing was his remarkable diet which included Sour Patch Kids, Tachos from the Universal Joint, and anything “new and improved.” Before attending any function with Lizzy, he needed to find out exactly what food would be served so he could eat prior to going if need be. He was a true connoisseur of gastronomical delights.

Daniel was an avid skier for his entire life and shared this love by teaching his girls how to be accomplished skiers as well. He loved going on trips with his friends and family and once succeeded in filming himself skiing for a solid 3 minutes, all the while thinking he was videoing his girls.

Lizzy and Daniel shared a weird fascination with the weather and enjoyed discussing the radar together and what the forecast might hold. They would call each other multiple times per day, sometimes multiple times per hour, for any or no reason. At the end of every phone call, no matter how brief, they would say, “I love you.”

Daniel spent every day dedicated to all of his girls. He is the father we all would want to have or hope to be. He got to spend his last week at the beach surrounded by people who loved him while surfing, paddle boarding, eating lasagna and hugging his family. He has touched the lives of countless people and his memory will be cherished by everyone who had the good fortune to have had Daniel in their lives.

In addition to his wife and daughters, Abby (15) and Davies (13), he is survived by his mother and father, Dr. Harry and Joyce Summerlin, his sister and brother-in-law, Dr. Doug and Rebecca Huntley, father and mother-in-law, Dr. Cecil and Susan Durham, brother and sister-in-law Drs. Will Durham and Anna Bartow and his nieces and nephews (Anna, Katie, and Ben Huntley, Eloise and Sam Durham) who will forever be blessed by their interactions with “Uncle D”. He is also survived by innumerous friends and extended family.

A service will be held at 10:30 am Friday morning, July 3 at Claxton Farm in Weaverville, NC. Please bring a mask and a camp chair if you want. Please dress comfortably. Daniel was not a huge fan of formality and stuffiness and would be upset if you felt you must wear a suit. A private interment will be held at a later date at Riverside Cemetery. The Summerlin girls have created a long list of their dad’s favorite places and are looking forward to many more adventures to spread his spirit into the world.

In lieu of flowers, the family asks that memorial donations be made in honor of Daniel Davies Summerlin, to PIVOTPoint WNC to the attention of Matt Nannis, 17 North Pershing Road, Asheville, NC. 28805, or donate at www.pivotpointwnc.com.