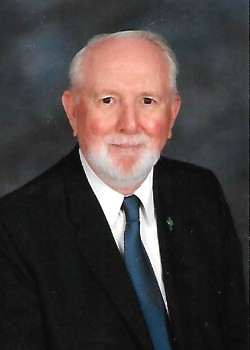 Born and raised in Boston, he graduated from Jamaica Plain High School in 1955, and entered the Air Force. After a short stint in Oklahoma, he spent 3 1/2 years as an airman stationed outside Paris, France, working in administrative support. He returned to Boston and worked overseeing shipments at the Campbell & Hall publishing company, where he met his beloved wife of 58 years, Maureen.

Known for an outgoing and engaging personality, he transitioned into a 20-year career in sales in a variety of industries. His work in sales spanned companies from Tubular Rivet and Stud Co. in Braintree, Massachusetts, to Avon Sole Co., in Avon, Massachusetts. He and Maureen lived in Quincy, Massachusetts, for more than 30 years where he was an avid backyard vegetable gardener and devoted father, taking his children to sports, clubs, music lessons and countless other activities.

He earned an associate degree from Quincy College and worked in administration at the Veterans Administration Hospital in the Jamaica Plain section of Boston for about 15 years before retiring to Asheville.

In Asheville, he volunteered for the ESL program at AB-Tech, Riceville Volunteer Fire Department, and most recently, at the VA Medical Center in Asheville. A parishioner at St. Eugene’s Catholic Church, he participated in many church activities and was an active member of the Knights of Columbus.

He is survived by his wife, Maureen; his daughter, Kathleen Walsh, of Hendersonville, North Carolina; and his son, Stephen Walsh, and daughter-in-law, Jane Huth, of Baltimore, Maryland. He has three grandchildren, Noah Walsh, of Princeton, New Jersey, and Sarah Walsh and Benjamin Walsh, both of Baltimore.

Due to COVID concerns, a private memorial Mass will be celebrated at St. Eugene’s Catholic Church for Mr. Walsh’s immediate family only. Family and friends who wish to view a livestream of the Mass may do so at noon on Wednesday, March 31 at St. Eugene’s website, Facebook page and YouTube page. A recording of the Mass will also be available following the live service. Following Mass at the church, all are invited to join the family outdoors for the committal service at 2:00 p.m. on Wednesday at the Western Carolina State Veterans Cemetery, Black Mountain, North Carolina. Though outdoors, social distancing and masks will still be required.