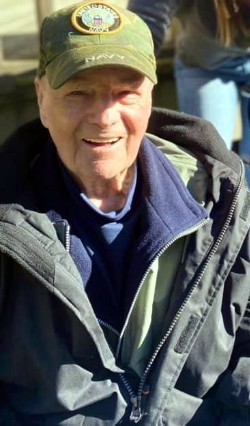 Just 3 weeks to the day after family and friends gathered to celebrate his “92” birthday, Dean Williams was called home by his Lord and Savior Jesus Christ on October 1, 2022.

Ancil Dean Williams was born in a farmhouse on September 10, 1930 in Shulls Mills, NC to Ancil Chick and Jesse Ida Williams. Dean grew up in the shadow of Grandfather Mountain during the Great Depression and World War II, and in 1948 he graduated from Blowing Rock High School. He immediately entered the U.S. Navy during the Korean War where he spent the next four years traveling the world while also playing basketball and boxing for the Navy.

Honorably discharged from the Navy in 1952, Dean worked for a year before heeding his mothers wishes to attend Appalachian State Teacher’s College from 1953-1957, receiving a Business Education degree. Dean did his student teaching at Beaver Creek High School in Ashe County.

Before graduating college, Dean met and fell in love with Betty Jean Payne. They soon married on August 3, 1956, spending the next 66 years together. By 1960 they had added a son and a daughter to their family.

Dean was offered a teaching position at his alma mater Blowing Rock High School, where he taught and coached girls and boys basketball from 1957 until 1961 when he moved his family to Asheville, NC. Dean began teaching 8th grade at West Buncombe Elementary in August 1961. There he spent 9 years teaching, vice principal duties, and coaching boys and girls basketball. In 1970 Dean started a 23 year love affair with Clyde A. Erwin High School, its students and the community. Dean retired in December 1993, but continued to be involved in coaching girls track, called “Curly’s Girls” and cross country.

In 1970 Dean started the first girl’s track team at Erwin HS and in 1989 Erwin built a new track and dedicated it to Dean Williams. Additionally, Dean became the boys varsity basketball coach and an assistant in football. The boys basketball team won back to back Buncombe County Championships in 1974-1975 and 1975-1976. From 1975-1977 he coached both JV and Varsity boys teams. In 1975 Dean also began coaching cross country. He received 2 Coach of the Year Awards and was honored to be chosen as a coach for the Blue-White game. In 1978, after 21years, Dean resigned from coaching basketball. He also became the Athletic Director from 1981-89. During that tenure, he served as the president of the Mountain Athletic Conference and was selected as Athletic Director of the Year. In 1988 Dean started the Indoor Track Program at EHS. Dean said “Every track has a finish line and every basketball has a goal, but if we are going to be successful we must have a mission to finish the race and reach our goal”.

A Celebration of Life Service will be held at the Mt. Carmel Baptist Ministry Center (across from Mt. Carmel Church) on Saturday, October 22. The service will begin at 11:00 a.m., and the family will receive friends until 1:00 p.m., following the service.

In lieu of flowers, a donation can be given to Mt. Carmel Church, designated for “Disaster Relief”. Missions and serving God was Dean’s heart.